Vivy and her husband were told they were late to register although they followed the appointed date. 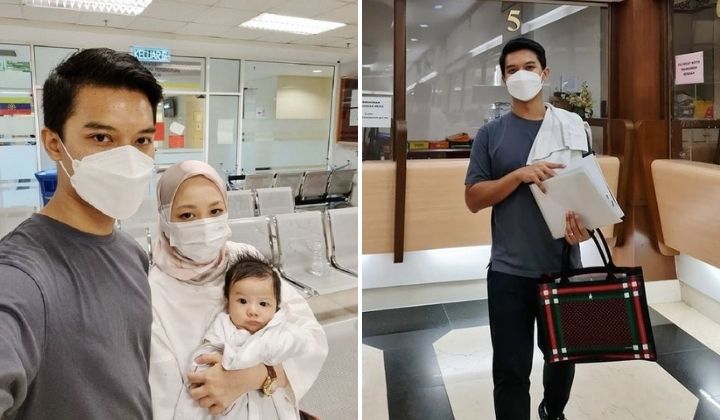 Local entrepreneur Vivy Yusof safely gave birth to baby Idris in December 2021. However, she didn’t know how tedious it could be to register Idris as a Malaysian citizen and wondered when the whole process would be digitised.

Vivy shared on Instagram that after she gave birth, the nurse at the hospital told them they could book online to register their baby.

When her husband Fadza did it, he got an appointment to register Idris in February. They thought it was late but chalked it up to Covid-19 delaying the process.

Fadza asked how would he know that if no one was informed. In reply, the officer said they advertised in newspapers and radio.

More forms to fill and pictures to take

Fadza had no choice but to go straight home. He had to print many forms such as forms to take an oath, forms for late registration, forms on parents’ details and each siblings’ details.

They also had to take a bunch of passport photos for each child in two sizes: passport and 4R.

After that, they had to paste the pictures one by one on the forms. The forms also needed MyKad, MyKid, birth certificates, wedding certificates and the utility bill.

Vivy shared how she had to take Idris, who was still asleep, to take his passport photo but that wasn’t allowed.

So they came back the second time and this time, Idris cried uncontrollably. Vivy said that Idris’s picture was not frameable to illustrate the situation.

Next, both parents and Idris had to go to court to take an oath. They also had to drag along a witness who was their friend, Seth, and signed the papers there and then.

The journey doesn’t end here. Right after that, they had to drive to a Jabatan Pendaftaran Negara (JPN) nearby, take a number and wait.

Vivy covered Idris the whole time because she was afraid he’d be exposed to Covid-19.

However, they found out that they filled the forms wrong so they had to fill out the new forms again.

Fadza had to go to another place to photocopy the identification cards (ICs). Meanwhile, Seth and Vivy had to go to the ‘marriage and divorce’ room to submit their witness forms.

When they got to the counter, they had to pay RM10, but only in cash, so they had to find an ATM while trying to soothe Idris who was crying.

They quickly rushed back to the immigration room because it was near closing time, and Idris was finally registered as a Malaysian citizen.

Throughout the whole ordeal, Vivy said it felt like they had just won in the Amazing Race.

Is this because we said he’s the last baby so it’s like the grand finale?

Vivy also found a ‘fun fact’ of sorts during the whole process. Apparently, the form had spaces to list a maximum of 15 children.

Vivy jokingly said the officers can have that page back to be recycled because there was no way she was going to have 15 children.

Some of them couldn’t believe that the officers are still using cash instead of card transactions during the Covid-19 pandemic.

Here’s to hoping that the registration process will be all digitised soon, so it’s easier for everyone.