When he realized he got cheated, he tried to hold back his tears. 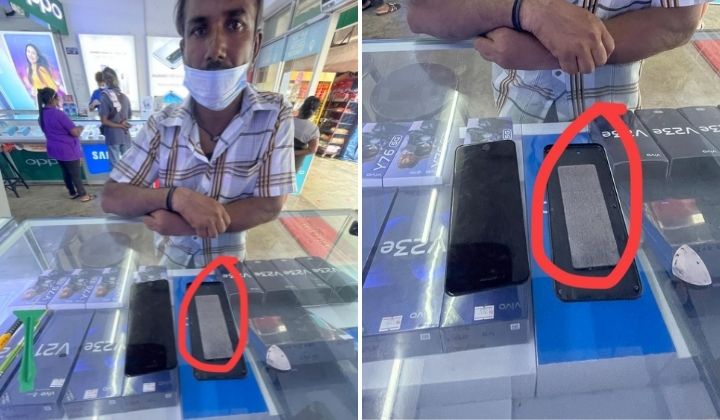 A Bangladeshi worker wanted to get something nice as a gift for his son only to be left heartbroken when he found out he was conned.

In a Facebook post by a mobile phone shop owner named Liu, the Bangladeshi man approached him and was beaming with joy because he was finally able to get an iPhone for his son.

He spent RM1,000 to get the highly coveted gadget as a gift but had trouble making the smartphone work so he approached Liu for help.

To both their shock and dismay, Liu found a slab of stone inside the smartphone instead of the battery or SIM card.

Liu said the man tried his hardest to hold back his tears when he realized he was duped.

Liu added that he really felt for the poor guy. Apparently, the man bought the ‘discounted’ iPhone from a man from Mainland China.

Netizens felt pity for the man

Many people who read the Facebook post felt pity for the man and were sorry that it happened to him.

Netizens pointed out that it’s a common scam and it has happened to other buyers as well.

A netizen shared that sometimes customers find that they’ve been conned when they find out that they can’t charge the phone even with a new charger.

A few of them wanted to raise funds to help the man buy another smartphone for his son.

However, Liu said there’s no need to send donations because the matter has been resolved privately.

There was also a reminder not to label everyone with stereotypes.

Some netizens pointed out that there are crooks of any race, religion and country.

Hopefully, everyone will be alert and be wary of scams whenever they purchase something especially when the price sounds too good to be true.

It’s advisable to check the items before walking away from the seller or the shop too.