The Orang Asli families in the area are afraid of the tigers and decided to move before any attacks happen. 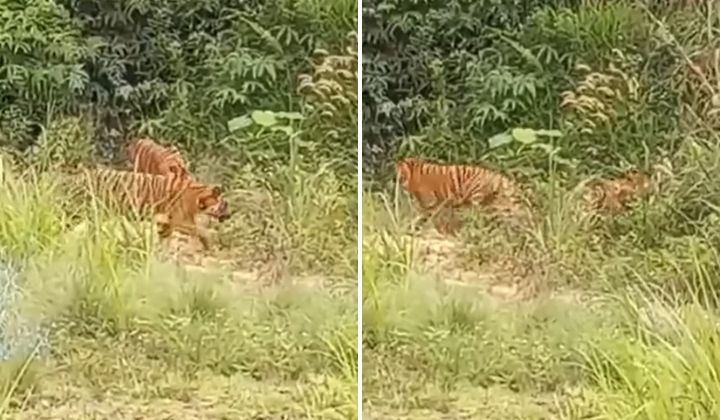 Usually, we hear about wild animals such as tigers losing their habitat. However, this time it’s the villagers who had to make a move for their safety.

Orang Asli families in Pos Bihai, Gua Musang in Kelantan had to move out from three kampungs due to a potential threat from three tigers in the area.

According to Kosmo, the tigers were spotted near Kampung Remau, Kampung Bayor and Kampng Bujok since Friday (10 December).

The residents are afraid to head out to forage for food in the jungle with the tiger’s presence.

A Kampung Remau resident, Hassan Achoi, 55, said about 17 families in the area moved to Kampung Tendrik after spotting the three tigers.

The families decided to make the move before anything untoward happens to them.

A resident in Kampung Tendrik, Pelinejon Assut, 38, hopes that the authorities will catch the tigers immediately and help the affected residents.

The Department of Wildlife and National Parks (PERHILITAN) has launched an investigation and the operation to capture the tigers is still in progress.

Netizens expressed their hope that the tigers won’t be killed after capture because the number of tigers in the wild is in the endangered category.

Another netizen pointed out how skinny the tigers were and said perhaps the animals ventured into the kampongs to look for food.

Our tigers are an endangered species

According to the World Wildlife Fund Malaysia (WWF Malaysia), our Malayan tigers are classified as Critically Endangered under the IUCN Red List for Threatened Species.

As it stands, there are only less than 200 tigers in Malaysia right now due to dwindling jungle habitats.