Rats in the kitchen can spread all sorts of nasty diseases, some fatal. 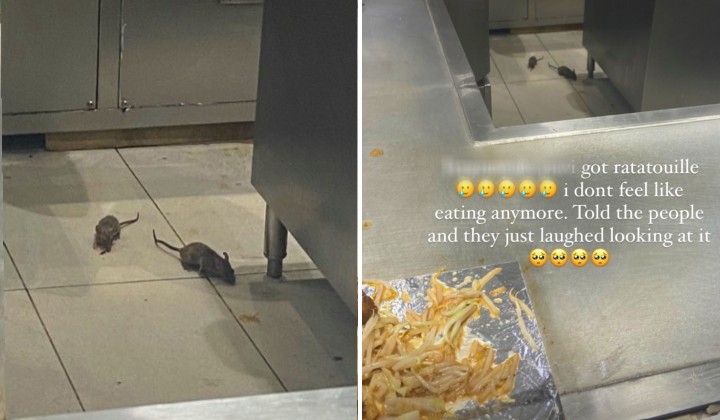 For netizen Sarah, what was supposed to be a delightful meal with her family turned into one of digust when she spotted two fat rats running around the restaurant kitchen.

In a series of Instagram stories, Sarah recounted that she had gone to the popular Japanese restaurant Teppanyaki in Pavilion Kuala Lumpur for a meal.

While eating, she suddenly noticed two rats scurrying fearlessly out into the open in the kitchen area.

Since meals at Teppanyaki are served table-side, customers sit around a large central grill, which directly looks into the kitchen, giving her a clear view of the two rodent’s adventure.

I don’t feel like eating anymore. [I] told the people [working there] and they just laughed looking at it.

She took pictures of the rats on her phone and also notified the workers immediately. However, to her dismay, they merely laughed off her concerns and did not seem to care about the uninvited guests.

I’m so sad because this is one of the famous branch of Teppanyaki. In the midst of me eating these 2 rats came out. I can’t believe the workers didn’t do anything about it after we have pointed out there were rats.

Real rats can’t cook, should not be in the kitchen

The reason why humans have such a visceral reaction to seeing rats near our food or living space is because rats often carry fleas, mites and ticks as well as spreading viruses and bacteria such as E. coli.

There is also a risk they may contaminate food and food packaging with urine, droppings and fur– all which might carry diseases such as HPS, Leptospirosis, lymphocytic choriomeningitis, plague, and typhus.

Hence, the kitchen must be kept immaculate and clean to ensure that diners are not unneccesarily exposed to such health risks.

However, it seems like Malaysia is still not taking food hygiene seriously, as leptospirosis is not particularly rare.

Dining out, even at fancy restaurants, can carry risks associated with rats and other pests as long as the kitchen is not vigilant with their upkeep and cleanliness.

Leptospirosis originating from rats is no laughing matters. Twitter mutual was tweeting about lepto outbreak in Sabah which claims one or two lives and former colleagues of mine were hospitalised because lepto infection while eating at a posh japanese restaurant in klcc.