The driver tested negative for drugs and alcohol. 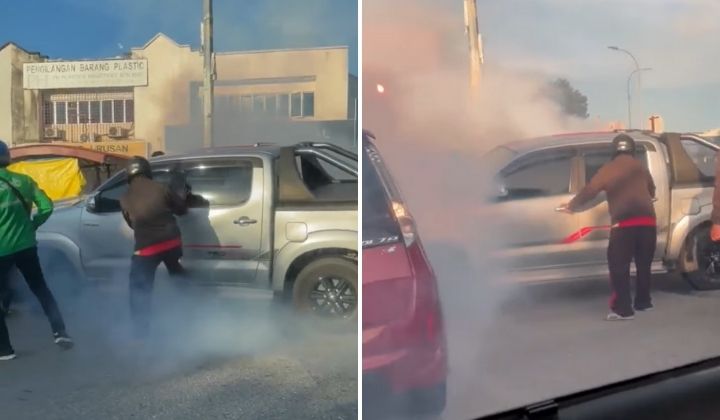 On Wednesday (27 October), a driver in a Toyota Hilux rammed into a Perodua Alza before crashing into a shop lot in Taman Jenaris, Kajang.

Based on news reports, the driver fainted due to an empty stomach and crashed into the Alza.

In the video, two men tried to open the front passenger door and one of them even hit the windows in hopes to wake him up. The Hilux was also spewing smoke after the crash.

However, the driver got startled when he woke up and accidentally drove the car into the shop lot on the other side of the road.

According to Kajang Regional Police Chief, Assistant Commissioner Mohd Zaid Hassan, the 39-year-old man who drove the Hilux came from the direction of Giant Prima Saujana towards Kajang town.

“As soon as he arrived at the location, the vehicle entered the opposite lane and collided with a Perodua Alza car coming from the opposite direction, causing it to slide to the right and hit a sales stall in front of the shophouse,” he said.

“Following the incident, the Perodua Alza suffered damage in several parts including the front and bumper. However, the 37-year-old driver was not injured.”

The urine test result showed that the driver was not under the influence of alcohol nor drugs.

Everyone is reminded not to drive on an empty stomach in case of fainting behind the wheel.

10 Deaths In USJ Road Crash, Victims Include A Mother And 8 Children