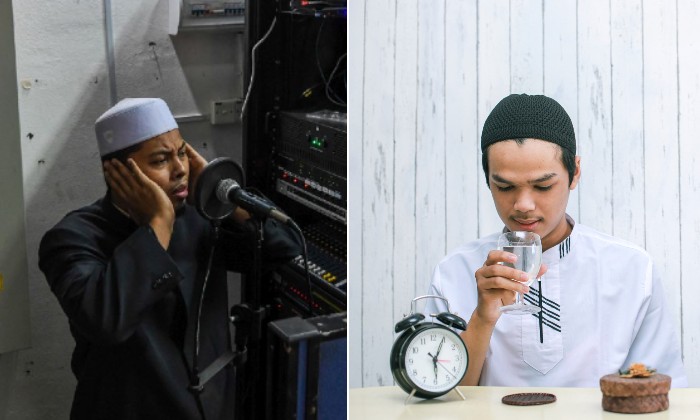 “Is it time to makan yet?” is a question that pops into everyone’s head – especially for Muslims who are obligated to fast or “pusas” during the month of Ramadan.

When fasting, Muslims would abstain from eating, drinking, smoking and sexual activities from the very break of dawn till the “azan” or the call to prayer is sounded during “Maghrib” or at sunset.

Fun Fact: Muslims can choose to fast any day of the year, except during Aidilfitri and Adidiladha. The Prophet Muhammad S.A.W encouraged fasting on several specific days of the week in the worship of Allah.

But sometimes it can get a little confusing to determine the correct time to “buka puasa” or break the fast.

Some people would listen for the call to prayer coming from the loudspeakers of their local masjid or surau. Others prefer to follow the azan broadcasted on the TV and radio. Meanwhile, there are also those who check their phones for local prayer time schedules.

The issue gets even more perplexing when factoring in the different time zones we actually have here in Malaysia.

Well, to clear up this confusion, the KL Mufti shared some useful information so everyone can buka puasa on time.

Answering a query he received on Twitter, Former Religious Affairs Minister and Federal Territories Mufti Datuk Seri Zulkifli Mohamad suggests that the most accurate way for the public to determine when it’s buka-puasa-time is to use a mobile phone.

He said that most mobile apps are equipped with local prayer times and schedules directly sourced from the Malaysian Islamic Development Department (JAKIM).

The Mufti went on to describe that using mobile apps was a simple and effective safeguard to get the specific times on when to break fast.

This is because, sometimes, even broadcast networks and the azan from the masjid or surau may sound earlier or later than scheduled.

There was once a radio station that mistakenly played the Maghrib azan early. As a result, those who break their fast on the radio are forced to perform qadha (replace their fast) because it is considered void… God willing, the (mobile app) system is accurate. Even the Bilal (a person who’s responsible for the call of prayer at the masjid) may sometimes be too late or early if there’s technical problems and such.

Where to get prayer times?

Mobile apps like “mySolat” developed by JAKIM, and others like “Waktu Solat Malaysia” provides prayer times and schedules taken directly from JAKIM. Both apps have moderate to excellent user reviews.