Ever wondered why the timezone lines curve around Malaysia and Singapore? 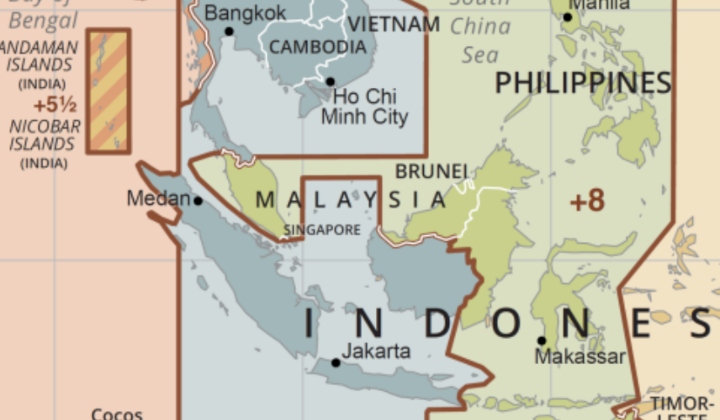 What Time Does The Sun Rise ?

If you’ve travelled to Jakarta or Bangkok, you may have noticed that compared with Peninsular Malaysia, the sun rises about an hour earlier (sometimes up to an hour and a half) in these places. As it turns out, it’s the sun in Peninsular Malaysia that actually rises late.

Bangkok and Jakarta are almost on the same longitude position as Kuala Lumpur, yet we are in different time zones. If you look at a map of the world time zones, you will find that there is an unusual encapsulating line around Peninsular Malaysia (and because they decided to follow suit, Singapore).

If we were to go purely by longitude, Kuala Lumpur and Singapore should fall within the GMT +7:00 time zone.

Singapore and Malaysia, can we at least agree on the time?

During their tenure as premiers, Tun Dr Mahathir Mohamad and Lee Kuan Yew disagreed on a great many things, but one thing they could agree on was the time. That it should be set forward to GMT +8 for a number on advantageous reasons.

Namely, having hours of sunlight later in the day being beneficial to all, especially farmers; and having our markets open and close the same time as Hong Kong’s – a boon for the business community.

What is the Malaysian Standard Time (MST) ?

Under his administration, he united East Malaysia and Peninsular Malaysia’s time zones into Malaysian Standard Time (MST) which is equivalent to GMT+8. Synchronising our time with Perth, Hong Kong and Manila. Which is why you can travel to these places without having to reset your watch. Even though, if you have a look on the map, they’re further east.

That’s the last time we changed timezones, but not the first. We’ve actually changed zone 6 times before that in our history.

One imagines that all this time alterations would make time travel quite tricky on Peninsular Malaysia.

It’s not the time you think it is. The true time is about an hour and fourteen minutes earlier.