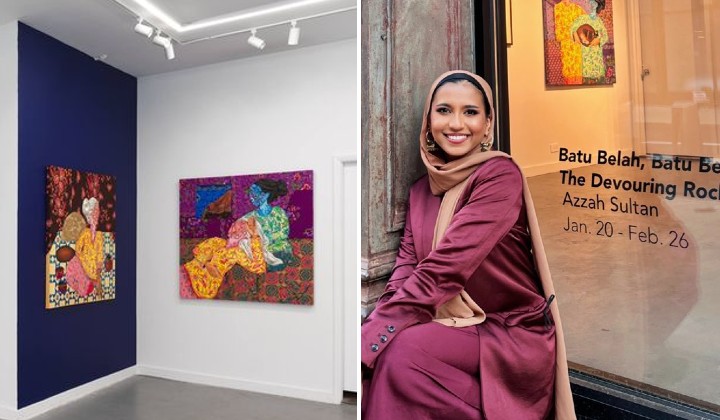 Her latest solo art exhibit will be held for a month from January 20th to February 26th, featuring her take on the classic Malaysian folklore Batu Belah, Batu Bertangkup.

The exhibit, titled Batu Belah, Batu Bertangkup: The Devouring Rock, reinvents the story of widowed mother living with her two children, a daugther and a son, and visualises the intergenerational trauma passed down from mother to daughter.

The folktale itself is a warning, mostly for children to be aware of the weight of their words and to be sensitive to the hardships of their parents.

The tale goes thus: One morning, the mother catches a fish full of roe. She tasks her daughter with cooking the fish, requesting that she save a portion of roe for her. The son, however, tempted by the delicious food, eats his mother’s portion as well.

When the widow returns and finds that her son has eaten her portion while her daughter failed to stop him, she believes that they are selfish children. The widow runs away to a nearby hill and throws herself upon a rock which devours her, leaving both children alone and parentless for good.

This isn’t Azzah’s first foray into showcasing Malaysian art in the heart of NYC either. Back in September of 2020, she dazzled the city with her very first solo show titled Anak Dara, which showcased beautiful batik from Penang.

Extraordinarily Ordinary: She Spoke Up And She AIN’t Done Yet