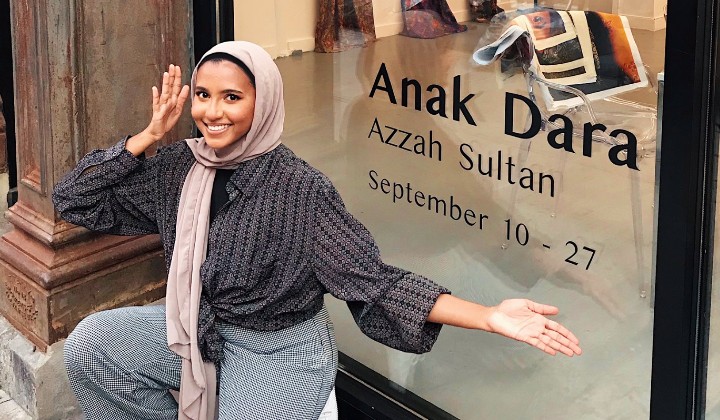 Although she is of Malaysian descent, she was born in Abu Dhabi and lived across Bahrain, Saudi Arabia, and Finland. She moved to New York at 16 years old. As such, she notes that staying in touch with her heritage has been a lifelong exercise.

Her solo show is titled ‘Anak Dara‘, which translates to virgin or maiden. It is a term of endearment often used by her mother, says Azzah. This choice is intentional to explore the nuances of the term, which is loaded with assumptions and obligations as a Muslim and a person-of-colour living in the United States.

For me, religion and culture is a fundamental point of my identity, as I am physically seen as Muslim with my hijab. But within my art I try to display those parts of my identity in a more nuanced way, where it doesn’t just symbolize the entirety of who I am but it is just a part of me, there is still so much more to me, this the use of the lack of body within the Anak Dara series of work.

For her Anak Dara showcase, she used batik fabric purchased in Penang and brought back to the US and drapes the fabrics together in artistic forms, adding hand-stitched effects or mixed paint to bring the art to life.

I was able to find fabrics, spices and objects of nostalgia simply by exploring my hometown with my parents and having them a part of the process of collecting these materials.

In this collection, she designed her pieces using silhouettes of her mother’s and her own hands in various Malaysian dance moves that we may find intimately familiar. Her pieces also make use of negative space woven in with batik fabric.

There are not a lot of Muslim women doing art, so I felt the need to present myself in a certain way.

Speaking to The Rakyat Post, she mentions that while she has not held any shows in Malaysia before, she would love the opportunity to do so.

I am currently working starting a new body of work soon and I hope in the future to display these artworks back home, InShaAllah.

Congratulation to Azzah Sultan on her achievement! We hope to see more of her artistic endeavors and Malaysian-inspired art elsewhere and back home too!

Did You Know You’re Wearing Your Relationship Status On Your Kain Batik?