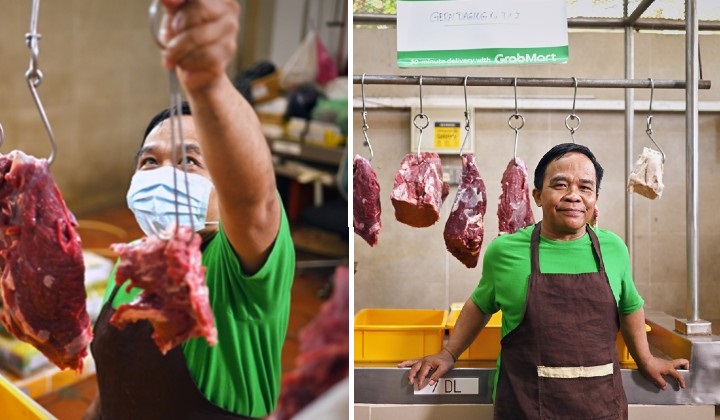 The saying and song The First Cut Is The Deepest, about how the first cut refers to one’s first love that didn’t work out, is somewhat true figuratively and quite apt to meat seller Zakaria Allaham’s story.

In his version, the first cut refers to his job as an administrator at a car workshop which he eventually left to pursue an interest in an industry entirely different – meat.

30 years later and Zakaria’s passion for the meat industry is still strong, and he has his previous job to thank for introducing him to it.

Undeniably, his previous job was a catalyst that sparked Zakaria’s interest in the meat industry. If it wasn’t for the nature of his role there to speak to customers, he would have never gotten the idea about importing cattle from Thailand.

He later found out he could get livestock from Perlis instead, which is a neighbouring state to Thailand.

But it wasn’t all about knowing where to get the cattle stock, but about learning everything the meat business has to offer, from the types of meat, grading systems, and even the way to cut the meat.

Even though his new love was strong, Zakaria would still work in the car workshop in the morning and cut meat in the afternoon.

The more research he did about the meat business, the more he fell in love with it.

This went on for about five years until he saved up enough capital to run a full-time business.

And that’s how his stall at Pasar Batu Lanchang in Georgetown, Penang was born.

In the last three decades or so, Zakaria has built a foundation of long-time customers whom he has known for years. The longevity of his business has seen generations buying from him.

At times, customers would even get Zakaria to cut meat they’ve bought elsewhere because he says, “there was something special about the way I cut.”

However when Covid-19 reared its ugly head, business went down by 60% and his family struggled to find ways to survive.

While many businesses pivoted to technology as a means to do business, Zakaria told TRP that many sellers his age weren’t comfortable doing so as they had more faith in face-to-face customer service and felt that an online business would change their principles.

For the 61-year old, he says as long as you are honest in your dealings, you can still provide the best customer service, even if it is online.

Since the beginning, my mantra has always been to do my business honestly, from making sure that my customers get the best quality meat to paying the best price for it. Jual dengan jujur. Itu yang paling penting

One thing a lot of senior citizens are comfortable with though and often use is Whatsapp.

My wife then joined a WhatsApp group with other small business owners who needed meat and we started taking orders from them. However, after some time, we realised that we needed to earn more to make ends meet, and that was when I decided to join GrabMart.

From there it progressed to a whole other market.

Ultimately, Zakaria managed to recover lost sales caused by the pandemic through the online platform GrabMart, where he is a merchant partner.

In general, the wider reach his business has online, the more accessible it is to buyers. Plus, many people now are buying groceries online.

It just goes to show that it is never too late to learn new things like using technology to run a business. In my case, technology has truly become my lifesaver in keeping my business going and I hope that other traditional butchers would get to experience the same by adapting to bring their business online.

While technology may have allowed him to continue his passion, it is Zakaria’s tenacity and love for the meat industry that has helped him overcome the challenging year and a half.

In our e-mail interview, he tells us that he can simply take a look at a cow and immediately assess the price and determine how many kilogrammes of meat he can get from it. More often than not, he is 90-95% accurate!

With that kind of knowledge, it’s no wonder Zakaria is still doing what he loves 30 years on.

So what’s his favourite recipe involving meat? Well, let’s just say it’s not something you’ll find when Googling “meat recipes” but rather something he says may sound weird to many.

I actually like to cook meat with the soft drink 7UP. It’s my signature dish that I created myself and there’s a story behind this recipe. One day, a friend of mine who was working as a chef in the marine police department was caught in a dilemma because the water supply had stopped all of a sudden. But he still needed to cook and the only source of “water” we could find was a can of 7UP. So, with no other choice left, I suggested cooking the meat with the soft drink and to our surprise, it tasted good in the end.

The “happy accident” is now his favourite recipe and he recommends marinating meat with 7UP, seasoned with salt, pepper and spices, as it helps make the meat more tender and brings out the flavour.

RM10,000 Compound Is A Heavy Burden For Some Neighbourhood Eateries