Dome Nikong has been credited in over 20 scientific journals and he even has an orchid named after him. 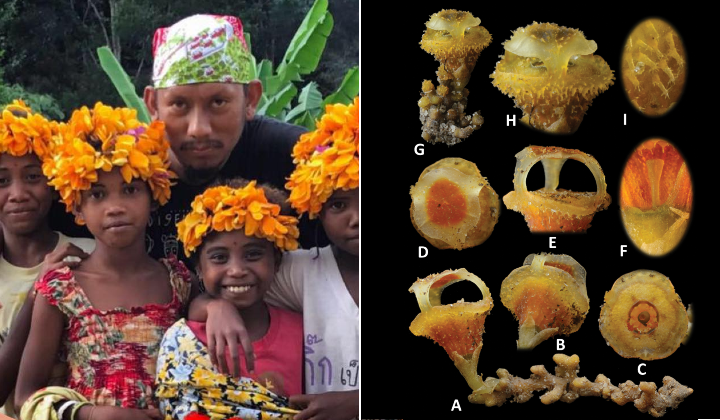 Scientists recently christened a newly discovered ‘Fairy Lantern’ flower found in the jungles of Terengganu after the mother of the Malaysian explorer who discovered it.

The Thismia plant, more commonly known as fairy lanterns, is a very peculiar flowering plant that grows in remote forests across Asia, Australia, South America and the United States (US).

Unlike most plants, the fairy lantern does not have leaves or chlorophyll for photosynthesis. Instead the parasitic plant relies on symbiotic relationships with fungi and the roots of other plants which it feeds and sucks nutrients from.

The fairy lantern got its name from the lantern-like flowers that it produces which only bloom for a short period of time, and often do so under the cover of the forest litter making them hard to find.

This latest specimen was first discovered by a local real-life adventurer by the name of Dome Nikong who unearthed the plant on Gunung Sarut located in the Hulu Nerus Forest Reserve back in 2019.

For his discovery, botanists from the Oxford Botanic Gardens and the Forest Research Institute Malaysia (FRIM) named the mystical looking plant after Dome’s mother, Siti Meriam, in honor of her support for her son’s environmental conservation efforts.

No bigger than a 20 sen coin, the Thismia sitimeriamiae plant sprouts an out-worldly appearance with pillars supporting an umbrella-like structure called the ‘mitre’, and is almost translucent enough to give it an orang glass-like appearance, like an actual lantern glowing in the night.

Though little is still known about the Thismiaceae (for short), scientists determined that it was indeed very rare and recommended that the plant be classified as a critically endangered species.

In fact, when Dome had returned to the site of his discovery back in 2020, only one specimen of the plant remained, with the rest being destroyed by wild boars.

A paper by FRIM and Oxford researchers Siti Munirah Mat Yunoh and Chris J. Thorogood, as well as co-authored by Dome himself, published in the botanical journal Phytokeys described the importance of conservation in preserving such mysteries as the fairy lantern.

In 2017, another species of fairy lantern dubbed the Thismia neptunis, which had not been seen in 151 years was rediscovered in the rainforests of Sarawak where scientists determined that the species was under threat from habitat loss and less than 50 individually growing plants remained.

Born and raised in Kuala Terengganu, 45-year-old Dome Nikong has spent most of his life as an explorer, photographer and independent researcher credited in over 20 publications where he had co-authored in the discovery and research of several plant species across the country – like this new pitcher plant found growing the eastern parts of peninsular Malaysia in 2020.

The adventurer even received the honour of having a wild orchid that was discovered in Guatemala named after him by botanist Fredy Leonel Archila Morales who studied the orchid for over 30 years – giving it the name Chysis domei archila for the former’s contributions to the scientific world.

It can be said that Dome’s discoveries have helped facilitate conservation and environment protection efforts to safeguard the biodiversity we have here in Malaysia.

Besides making wondrous natural discoveries, Dome also dedicates his life to documenting the human condition with his photography – memorializing the lifestyles of the country’s Orang Asal communities such as the Semoq Beri, Jahai, Semai, Mah Meri Che Wong and the Temuan people.

According to his online profile, his most recent project involves documenting the indigenous Bateq people scattered across the Peninsular.

Dome says that he focuses his exploration and photography on the minorities living in Asian countries and has tracked deep into jungles and crossed vast rivers and oceans to be with these aspiring communities.

I prefer to capture them in their natural habitat and way of living since their lifestyle keeps slowly changing with time. If we don’t record them, there is a possibility in the future that our young generation will not know the actual lifestyle of these aboriginal people.

Dome’s photography has been featured in more than a dozen photo exhibitions across the country such as the ‘Our Legacy’ Merdeka exhibition in 2013.

He has also been credited as a writer for the Fotografika print magazine and had even had published his works in a book titled Wild Terengganu which seemed to be a great hit among nature lovers.

To discover more of Dome’s adventures, I seriously recommend that you check out his YouTube channel DigitalDome where the explorer takes viewers on an up-close and personal journey of discovering the world and the beautiful people that inhabit it.