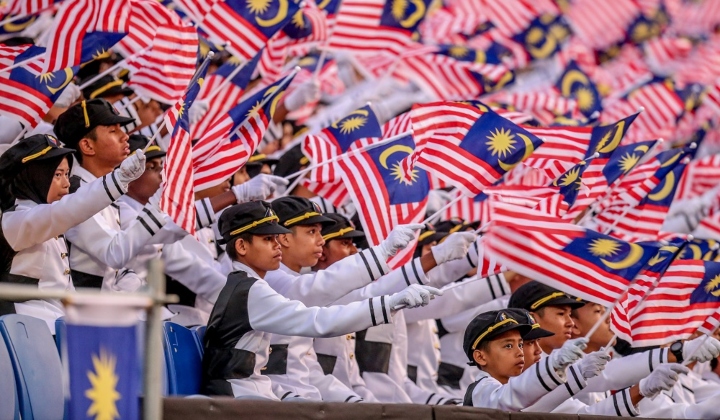 ‘Don’t believe a mouth of a man, dare to swear, but afraid to die.’

These are the lyrics to the popular 1920’s song called Terang Bulan. If you’ve heard it, you’d instantly recognise the melody as the tune to Malaysia’s national anthem Negaraku.

Striking a curious chord in me the first time I heard it, I immediately set out to find why this was so. Looking up the history of the melody, there are some differing accounts to its origin.

Before the melody became the national anthem

Some say the melody of the song first arrived in Malaya from Portugal with Afonso de Albuquerque some 400 years ago.

Some say it began in Java as a tale of lover’s longing across the waters of Malaya; originally a Spanish tango popular in Indonesia in the late 1880s.

The story goes that in 1888 on a royal visit to England, Raja Mansur of Perak was accompanying Sultan Idris and was asked about the anthem on Perak.

Deciding that it would be undignified to admit that Perak had no anthem, he simply invented one and hummed the tune of a melody he had heard in the Seychelles where his father was living in exile. A song called Rosalie by French composer Pierre Jean de Béranger.

Although Béranger was known to be more a lyricist who borrowed melodies, the records attributing the melody to him are questionable and in doubt. The melody was quite popular in the Saychelles, where sailors and little village boys could heard whistling the tune.

The song’s melody was adopted in 1918 to be the Perak Royal Anthem: Allah Lanjutkan Usia Sultan

Popularity between the 20s and the 50s

In the1920s Terang Bulan was a popular song recorded by Krontjong Orchest Eurasia.

Even a cantonese version was recorded in 1928.

A version of it was published in the 1930s in English titled Mamula Moon by Danny Vaughn which had a Hawaiian twist.

In the 1940s, the song ‘I Shall Return’ by Anne Shelton also used the melody.

In 1943, the song was then used in the Japanese propaganda film ‘The Tiger of Malaya’, the narrative of the film being broadly based on the story of Tani Yutaka, the true story of a Japanese man born in Terengganu who became a secret agent for the Japanese military.

The song ‘Malayan Moon’ by Paul Lombard & His Orchestra was published in the 1950s.

There was even a film called Terang Bulan di Malaya in 1955.

Since independence, it is not played as a popular melody, and any such use is proscribed by statute, so you’re not likely to hear it on the radio.

Independence and the National Anthem

In the days leading up to independence,  Tunku Abdul Rahman, organised and presided over a committee for the purpose of choosing a suitable national anthem.

On his suggestion, a worldwide competition was launched and 514 entries were received from all over the world but none were deemed suitable.

The Committee then turned to the Perak State Anthem. On 5 August 1957, it was selected on account of the “traditional flavour” of its melody.

New lyrics for the national anthem were written jointly by a Panel of Judges with the Tunku himself playing the leading role. At the time this melody was still used as the State Anthem of Perak.

Then Negaraku was performed by our first national choir on Merdeka Day, August 31st 1957, as recounted in the short film Getaran Pertama.