Passing on lessons through the help of technology. 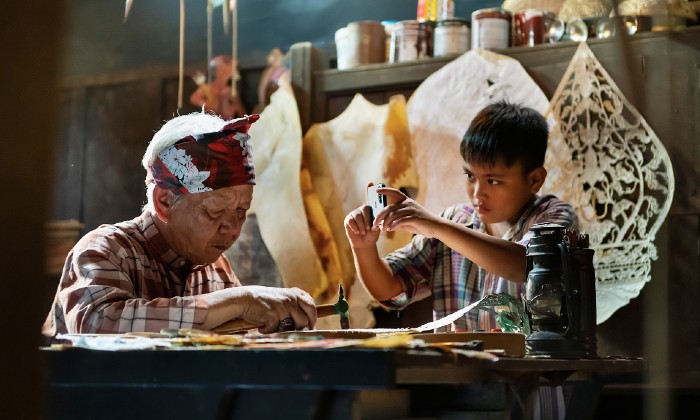 If there’s one thing that’s persisted over the centuries, it’s mankind’s lingering desire to tell stories.

Though the way we tell our stories have evolved over time – from simple cave drawings to the HD videos that most of us enjoy today. Our passion to narrate history, spin tales of wonder as well as both capture and showcase our cultural and spiritual legacies have continued thanks to the lives of storytellers like Eyo Hock Seng and his grandson Eyo Adam.

66-year-old Eyo, or more affectionately called Pak Cu, is one of the last remaining “Tok Dalang” in Malaysia – a master puppeteer in the traditional art of Wayang Kulit.

This ancient shadow-puppet show has been practised throughout the region in places such as Indonesia, Thailand as well as here in Kedah, Perlis, Johor and Kelantan for over 200 years.

Wayang Kulit is deeply tied with the culture and sacred beliefs of the people from its time, with its practice admired throughout Nusantara – put on stage for kings, nobles as well as entertaining the masses during occasions such as festivals and celebrations like weddings, birthdays and circumcisions.

Back then the theatrical performance was a spectacular sight to behold, delighting people of all ages with colourful silhouettes that would sing, dance and fight in magical tales projected on a simple white canvas, illuminated by an oil lamp.

Behind the scenes sits the Tok Dalang who skillfully conducts the show with intricate puppets that were painstakingly hand-made from animal hide and wooden sticks, to take on vivid two-dimensional forms with jointed limbs and the exaggerated features of mythical Maharajas and monsters.

Accompanied by an orchestra of traditional gamelan instruments, the Tok Dalang would spend hours narrating stories of tragedies and triumphs as the audience cheered, laughed and reflected upon the moral and spiritual lessons conveyed in each tale – Like the epic of Hikayat Sri Rama which inspired messages of overcoming evil, envy, greed and among many things, helped people recognize and rise up to life’s challenges.

The story goes on

Nowadays, the once-revered art form is only seen in places like museums, cultural events and tourist traps, seemingly unable to compete with the fast-paced and often scandalous entertainment that became our guilty pleasure in the 21st century.

However, with his grandson Adam as an apprentice, Pak Cu believes that even old traditions like the Wayang Kulit can evolve and be elevated to reach a wider appeal with the use of modern technologies to capture, catalogue and contribute to our more content-driven world.

Catch “Layar Harapan”, the inspiring tale of legacy, hope and perseverance told through the intrepid eyes of eight-year-old Adam.

The short film depicts the unbreakable bond between a grandfather and his grandson over their love of the mystical arts and how age-old traditions can move side-by-side with modern technology to thrive in an ever-changing world.

Or take a step behind the screens of Layar Harapan for answers on why the old and new should co-exist to help bring lessons from the past to the present and far future, (HERE) on YouTube.

Pak Cu and his grandson’s talents are proof that mastery of skill takes dedication, passion and the right tools. If you’re looking to become a master storyteller yourself, start your journey with the iPhone 12 Pro Max through the Maxis Zerolution Plan, (HERE).