The heart-wrenching plea is going viral on social media. 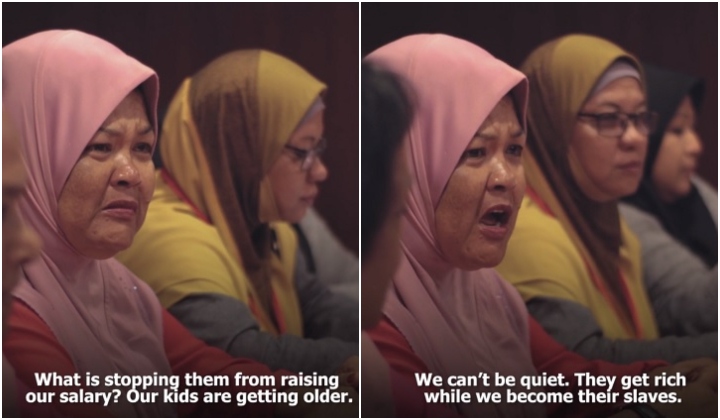 In the country’s medical system, one vital group that often gets overlooked are the hospital cleaners.

Paid only the minimum wage of RM1,200 while exposed to various illnesses, their situation became even worse during the outbreak of Covid-19 in Malaysia.

Amnesty International highlights that at the start of the outbreak, the cleaners did not have access to adequate personal protective equipment (PPE) when cleaning Covid-19 wards and facilities.

Now, a video of their tearful plea to be treated with dignity and get fair wages have gone viral of social media.

The minute-long clip uploaded on Twitter shows a hospital cleaner in a meeting asking, “Why can’t people like us get a raise?”

They think we’re stupid because we work as cleaners. It makes me so sad, I feel like I want to cry. They treat us like slaves.

The clip, which has gained significant traction on social media with thousands of Malaysians showing support, is actually an excerpt from a powerful documentary depicting the struggles of hospital cleaners called “Bila Kami Bersatu” by Minxi Chua and Asyraf Abdul Samad.

The scene was taken during a post-mortem meeting by the National Union of Workers in Hospital Support and Allied Services (NUHWAS) after their employers shot down their requests to increase their basic salary, as well as increments to RM1,300 or RM1,500 depending on their experience.

The documentary explains that cleaners at Malaysia’s government hospitals do not receive yearly increments or additional Health Ministry allowances as they are hired as yearly contractors by a private company.

During the negotiations, a representative of the employer was heard implying that their current wages were sufficient as hospital cleaners’ wages 20 years ago was RM550.

In June 2020, five members of the NUWHSAS were arrested after protesting outside Hospital Raja Permaisuri Bainun (HRPB) in Ipoh with claims that they had been subjected to intimidation and union-busting since early this year.

They were also protesting the lack of increase in sick leave and annual leave according to working seniority, and reduced number of paid public holidays.

Although they were wearing face masks and maintained social distancing during the protest, the activists were then charged under the Prevention and Control of Infectious Diseases Act 1988 as well as Section 186 and 269 of the Criminal Procedure Code (CPC) for breaching Conditional Movement Control Order (CMCO) rules.

Each of the activists face a fine of up to RM1,000 or six months’ imprisonment or both.

Their employer, UEM Edgenta Berhad, later released a statement denying their claims and stated that it had implemented actions and safety measures to safeguard the health and safety of its employees during the Covid-19 pandemic.

However, Amnesty International pointed out that while the PPE situation had improved in most hospitals, active union members championing for their rights have been subject to intimidation and threats by their employers.

Among the actions that the hospital cleaners activists claim they face now include:

How to help our hospital cleaners?

Those who would like to lend their support to the arrested hospital cleaners, can take action via Amnesty International’s website (HERE).

The hospital cleaner’s union also says that Malaysians can write a letter directly to the Attorney General (AG), asking him to drop all the charges and e-mail it to pro@agc.gov.my or ag.idrus@agc.gov.my.

You can also show solidarity with their plight by spreading the message on social media with the #CleanerJugaFrontliner.

To get a grasp of the lives of Malaysia’s hospital cleaners, watch the ‘Bila Kami Bersatu’ documentary below: