Fans have been waiting for 30 years for this. 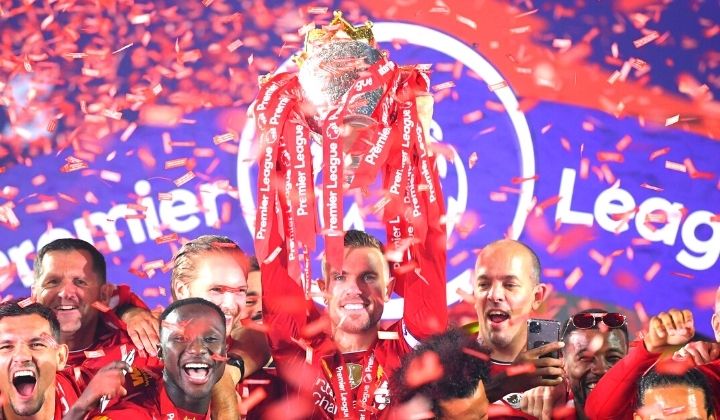 It was around 5am on 26 June in Malaysia when news broke that Liverpool Football Club was the undisputed champion of the 2019-20 Premier League season, exactly 30 years after their last Premier League title.

Liverpool FC is known to have some of the most loyal and supportive fans in the Premier League.

To celebrate this milestone, a group of Liverpool fans in Malaysia came together to create a montage of them singing the club’s anthem. You can check it out on Carlsberg Malaysia’s YouTube page.

It is a brainchild of Liverpool FC fans in Malaysia who took the time to record their own video, and submitted it to Carlsberg who then made it possible by sharing it with other fans from around the world.

According to the fans, the video was made in the spirit of bringing people together virtually, though we are now apart. In short – you will never walk alone.

The BBC even went as far as to describe the drought as “30 years of hurt” for both the club and its fans.

However, the club also achieved great things during those 30 years, such as the “Miracle of Istanbul“.

One cannot talk about the club’s performance in the 2000s without mentioning the 2005 UEFA Champions League Finals, played between Liverpool and AC Milan. The game signified the return of Liverpool as a force to be reckoned with, as well as being described as one of the greatest games in football history.

Liverpool was facing a three-goal deficit at the end of the first half. Steven Gerrard, who just became team captain in 2003, demonstrated his leadership qualities and led the team to a legendary comeback which we now know as the “Miracle of Istanbul”. Gerrard, Vladimir Šmicer, and Xabi Alonso each scored a goal within six minutes in the second half, which ended the match in a draw.

A penalty shootout was eventually required to determine the winner as extra time also resulted in a draw. All eyes were on goalkeeper Jerzy Dudek, who successfully used the infamous ‘spaghetti legs’ tactic (conceptualised by an ex-Liverpool goalkeeper, Bruce Grobbelaar) to distract the first two AC Milan players during their penalty shoots. Tensions were high as the whole stadium watched the final AC Milan player take the last shot, again successfully blocked by Dudek, and the rest was history.

The club also welcomed new talented players like Peter Crouch and Fernando Torres, making Liverpool a real title challenger for the rest of the decade.

They are coming back better and stronger

2015 saw the exit of Rodgers and the hiring of current manager, Jürgen Klopp. Liverpool made its way back to the top four of the Premier League for the next two years, and fans started to have high hopes for the club again.

It was also during this time that fans saw new faces on the team, such as Roberto Firmino, Alex Oxlade-Chamberlain, and Mo Salah – the latter who immediately made his presence felt with his outstanding performance on the field. Salah currently holds the Liverpool record for the most goals in a debut season, and was also named the top scorer of the 2017-18 Premier League season.

The end of the 30-year drought

There was a strong driving force behind Liverpool when they started the current season. No one is quite sure what it was – perhaps it was their previous season’s performance, or it could be Klopp’s rebuilding bearing fruit – but the team was unstoppable out of the gate, starting the season with 18 consecutive wins.

Fans were left amazed and excited as the players scored goal after goal, culminating in 24 consecutive home wins, a new all-time record in the Premier League. By winning 32 out of 38 games in this season, it is no wonder that Liverpool broke Premier League records again to become the earliest club to win the title.

Carlsberg also released a range of limited edition Liverpool FC Champions cans and bottles so fans can join in the celebration together with probably the best beer. You can get them now from hypermarkets, supermarkets, convenience stores, bars, coffee shops, restaurants, and participating online stores nationwide:

No matter how the next season is going to be like, both the players and fans know that in Liverpool, you’ll never walk alone.