Love in the time of coronavirus. 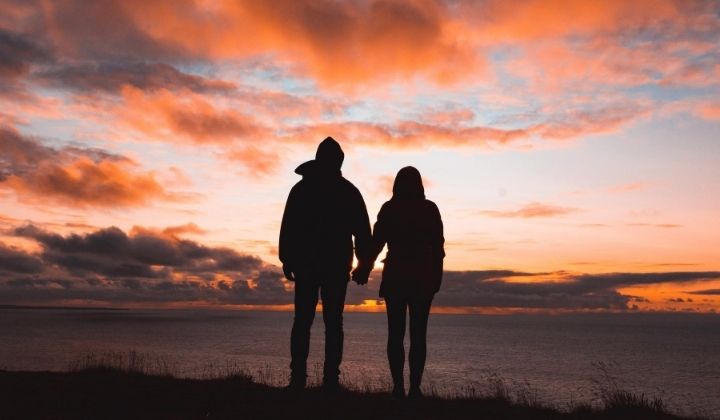 There was a point in time, not too long ago, that the view of the Johor-Singapore Causeway was a familiar sight for me. It is a bridge I cross once every two months: not for work, not for leisure; but for something that is an integral part of my life – my long-distance relationship (LDR) with my fiancé.

You can imagine how the world seemed to be crumbling around me when the Malaysian government announced that they are implementing the Movement Control Order (MCO), and that international borders will be closed till further notice.

As of the time of writing, I have not seen my fiancé for five months.

The often neglected and rarely discussed existence of bi-national couples

Marriage and relationships between people of different nationalities are not new. Bi-national marriages have been happening for centuries between royal families, noble houses, and everyday people like us.

And the number of bi-national couples around the world are ever increasing.

This could be attributed to open borders, the advancement of technology, and the rise of affordable transportation. Not only did these make it possible for us to meet people from different parts of the world, it has also made sustaining LDRs easier.

Despite the growing numbers, the existence of bi-national couples are rarely discussed in the public sphere. As such, permission for these couples to cross borders and be reunited was not granted until a week after the MCO started.

Even so, getting the necessary paperworks for that is not an easy task. Misleading information and the pandemic have delayed married couple Nina Zaidi and Hayden’s efforts to obtain a Long-Term Social Visit Pass (LTSVP), an essential document that Hayden requires to enter Malaysia as he is a foreign national. They have also requested permission from the Immigration Department of Malaysia (JIM) since June, but have not gotten a reply.

Nina and Hayden are currently in the United Kingdom (UK), where the latter has citizenship. With no approval from JIM and Nina’s tourist visa expiring soon, the couple may be forced to be separated again.

I think it’s the fear of being apart again because before we decided to get married last year, we were in a long-distance relationship for three years. We got married because we wanted to be together physically.

They have documented their struggles and thoughts in their YouTube channel, which you can see here:

Bi-national engaged and unmarried couples fall into a grey area

While spouses have marriage certificates to support their applications to reunite across borders, engaged and unmarried couples fall through the cracks under the current travel ban policies.

Like myself, Sara L and AR* are engaged to their fiancés with marriage plans that are interrupted by the pandemic. Sara had not seen her fiancé, Will, in person for eight months; whereas AR did not have the chance to see hers for a year.

*AR asked to have her name withheld for privacy reasons.

Both of them are currently applying for visas so they could enter the United States (US) to have their marriage solemnised. Unfortunately, the application process was interrupted by the pandemic and it seems that nothing is moving forward.

It was difficult for me at the start of the lockdown because I was always at home and couldn’t go out. I won’t lie, there were times where I cried so much because of being separated by this pandemic. Initially, I thought work and my hobbies would distract me, and still today, this has been a struggle.

Similar to Sara, AR has also endured the last few months in tears and occasional breakdowns. She also shared that it was frustrating whenever friends and relatives broached the subject of marriage, which she found really difficult to answer given the current situation.

The pandemic has caused many government and business sectors to slow or shut down, leaving couples with travel restrictions and many uncertainties. This has led to many having to postpone key life events like marriage and starting a family.

Though these are tough times, both ladies are grateful for having supportive partners. Sara and Will have regular FaceTime calls every day; while AR’s fiancé is always there to comfort and cheer her up.

Our relationship has gotten stronger. All we want is to progress on to get married and move on to start a family together. We are more in love every day, and we know how true we are to each other as the real self comes out during difficult times.

Earlier this month, Malaysia and Singapore announced that their borders would be open from mid-August onwards for “essential travel for business and official purposes”.

At the same time, the government has also decided to allow medical tourists from designated green zone countries to enter, too.

Yet under all these schemes that allow for border crossings, none of them apply to spouses and unmarried couples without long-term visas or permanent residency in another country. What hurts more is that travelling to meet and/or marry your partner also falls under what most governments categorise as “non-essential travel”.

Lam Cheryl was told by JIM that travelling to be with your significant other, no matter how serious the relationship is, is not considered a “valid” reason to exit the country. She has not met her boyfriend of four years, who is a German citizen, since 21 January.

Like every Malaysian, she is thankful for the government’s swift actions that helped keep the country’s Covid-19 situation under control. However, there are not enough schemes to ensure loved ones can be reunited.

Honestly speaking, I think the government is doing a good job, and I’m sure they’re doing the best they can as fast as they can. But I don’t think completely shutting the borders is the ideal thing to do, they shouldn’t say relationships are not a valid reason to travel. They’ve allowed people to go home to their own countries but I think many people find “home” in another person. Doesn’t matter where you are.

This sentiment is also shared by bi-national couples around the world who are affected by their countries’ travel ban, which then led to the birth of a campaign called #LoveIsNotTourism. The campaign calls for governments around the world to recognise travel requests by unmarried couples and families to be categorised as “essential”, as these people are travelling not for fun but to be reunited with people they love and those whose physical support they need.

Currently, ten countries in Europe have allowed unmarried partners to cross borders, as long as they are able to prove the existence of a relationship that is “lasting and sentimental”. This can be in the form of shared bank accounts, passport stamps, etc.

The #LoveIsNotTourism campaign in Malaysia

As the border closure drags on, I begin to feel a mix of hopelessness and loneliness. I comb for updates on a few Facebook groups that concern travels via the Johor-Singapore Causeway, yet I find no news about remedies for my situation.

Most people who cross the Causeway are business travellers, who would soon be able to do so via the two schemes introduced by the Malaysian and Singaporean governments. Everyone was concerned about their livelihood and money, which made my situation sound so unimportant and insignificant.

It was through one of these groups that I found a mention of the Love Is Not Tourism Malaysia Facebook group. As silly as it sounds, I have come to view it as an emotional support group, knowing that I am not in this alone.

The Malaysian group was started by Crystal Au and Elise JH, who connected in the global group. Crystal found out about the global campaign from her boyfriend, who was informed about it by his father.

We would like to help people to reunite by stand out to speak out like Europe, the reason for me to keep doing is the support from my boyfriend and all the members are encouraging and support each other, therefore, I appreciate every member to help out by trying our best to fight for our loved ones and making it happen even though success or not.

One of the few members whom I had the chance to speak to from this group was Inarah Dzahanurin, who said what I felt was the most important thing everyone should understand:

Families or even unmarried couples shouldn’t be any less important, just because it doesn’t contribute to the economy.

The last time Inarah saw her partner, who is a Dutch national, was six months ago. As the Netherlands is one of the countries which allows unmarried couples to enter, she now has to wait for approval from JIM to exit Malaysia. This, unfortunately, is an approval that many of the couples in the group have yet to receive.

“We are willing to submit to appropriate safety regulations”

Couples who are part of this campaign are more than willing to follow the necessary standard operating procedures (SOPs), from undergoing quarantine to providing proof of their relationship. All these are mere hiccups, small hurdles that lead to a greater reward – that of reuniting with people they love.

This sentiment is echoed by Disti Sadewa, an Indonesian citizen whose partner is an Egyptian national studying in Malaysia. The couple has plans to make Malaysia their home, as Disti also has plans to pursue her masters degree in a local university.

I believe that there will be no increase in cases (for bi-national couples to reunite) because we will follow the rule, like getting tested, quarantined… As long as we can eventually be with our partner.

Aisha Anuar, who has plans to tie the knot with her fiancé currently based in the UK, shared a few suggestions that she felt could help couples in similar circumstances.

If Malaysia could recognise marriage via remote means (Zoom, Skype, etc.) between international couples, or implement proxy marriages, or better yet introduce marriage visas, something that I see as vital in the current situation, it would make things a little easier for people who are in the same situation as us.

She cited the recent online nikah ceremony held under the supervision of  the Federal Territory Islamic Religious Department (JAWI), and how Zoom marriages are now recognised in New York as examples.

As of now, there is no news as to whether the Malaysian government will look into the situation of bi-national couples separated by travel bans. The group has started a petition and sent out letters to various members of parliaments to seek assistance, which members are actively helping with.

While everyone in the group – including myself – are confident that we will soon meet our other halves again, the most important question remains unanswered:

You can show your support to bi-national couples separated by the Covid-19 travel ban through this petition.