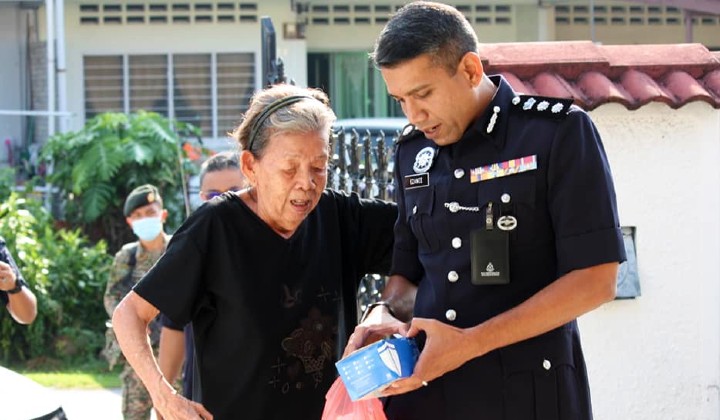 Nik Ezanee got to know of Ah Siong as a family friend since she worked as a supervisor at his parent’s company in Seapark and would always buy him pandan-flavoured pau when he visited the workplace. Hence, Nik Ezanee has fond memories of Ah Siong, and it appears that the feeling is mutual.

When his parents casually mentioned that Ah Siong was still alive, Nik Ezanee immediately decided to visit her. This time, he brought along a big bag of pau in return.

The elderly lady was delighted at his visit. It turns out that Ah Siong has been keeping track of Nik Ezanee’s career with great interest, showing him a box filled with newspaper cuttings relating to Nik Ezanee.

Nik Ezanee also took the chance to mention that the elderly are in a high-risk group for Covid-19. As such, he took it upon himself as Petaling Jaya police chief to share the importance of hygiene and safety awareness, particularly since many Petaling Jaya residents are elderly.

At the time of writing, the clip has garnered over 2.1K shares and 229K views on Facebook. Many comments praised the sincerity behind Nik Ezanee’s actions and the strong friendship between the two.