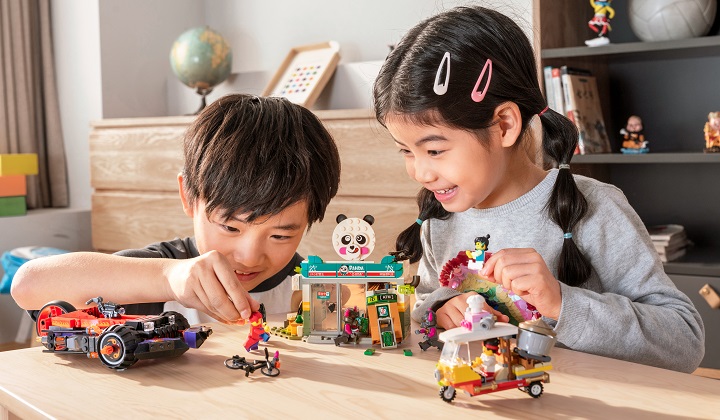 Think of the word “LEGO” and you’re immediately transported back in time to playdates where the simple 2 x 4 brick can transform from a skyscraper to an airplane. Or, you think about your new LEGO building project right in the living room, where you meticulously build a miniscule new world away from the clutter of real life.

Clearly, this simple brick has an almost supernatural ability to build a bridge between kids and adults.

No two are more representative of this state of being kids at heart than LEGO’s Senior Design Director Simon Lucas and Senior Design Manager Dennis Fong.

“We play everyday,” admits Simon. “In fact, I’ve never stopped playing since I was 7 or 8 years old.”

We actually take time out of our day where all the designers will swap the projects they’re working on. Then, we’ll just play and learn!

That’s not all though, the Danish toy production company also brings in children weekly to see how they play with their creations.

Wherever you go in the world, kids are perfectly honest. If they don’t like something, they’ll either ignore it and move on to the next toy or they’ll tell you!

When creating the new LEGO Monkie Kid theme, derived from the 500-year-old Monkey King Chinese legend, Simon admits that the children were his guide in transforming the ancient tale into a modern toy.

Travelling all over China, Simon gained feedback from scores of children, parents and grandparents.

The legend of the Monkey King is something just incredible for their families, every generation has a common link to it, and we wanted to create a new chapter that sparks everyone’s imagination!

While the Monkey King’s story has a beginning, middle and end, LEGO’s Monkie Kid is just starting his journey.

It is the first ever LEGO theme to be inspired by a Chinese legend and begins when the Monkie Kid finds Monkey King’s legendary staff and he becomes the chosen one. Together with his merry band of brave and loyal friends, Monkie Kid goes on a quest to stop the Demon Bull King and his army of Bull Clones from taking over the city.

With this one simple step, LEGO has opened up a whole new realm of possibilities and adventure to a tale that’s, well, as old as time.

Simon says it’s for the kids to look at it and say, “hey, that’s a kid like me”. It lets kids think that maybe they can be the next chosen one, the next Monkey King.

However, since it’s a LEGO creation, this isn’t just for kids. If there’s one thing that LEGO excels at, it’s creating a multi-generational playing experience.

Dennis Fong explains that it all boils down to their core values about fun, learning, creativity, imagination and quality. The only limitation, he says, is the imagination.

He’s not boasting, either, just 6 pieces of the simple 2 x 4 LEGO brick can make over 9 million combinations.

It’s as relevant 50 years ago as it is today. I mean, bricks from the past can still be used with the bricks today and that’s wonderful how it brings together generations in play.

Simon echoes his sentiment, declaring that it’s probably one of the most creative mediums he can think of, and one of the best ways to create stories. “Stories are a passage,” he says, “you participate and build on it to create.”

We make the sets but it’s really to inspire people to make their own creations.

You can find out more about the new world of LEGO Monkie Kid at the website (HERE).