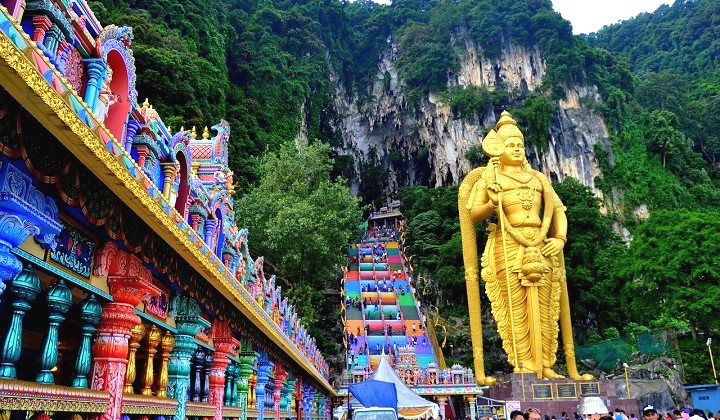 Every Malaysian knows of Batu Caves. We beam in pride whenever international celebrities pose at the iconic rainbow-hued stairs and cringe in fear whenever we come face to face with the mischievous macaques.

It is actually the southernmost large limestone hill on the Asian mainland and the only natural exposure of limestone in the vicinity of Kuala Lumpur.

Besides being a natural wonder, Batu Caves is also one of the most important Hindu shrines in Malaysia. The temple nestled in the limestone hill draws thousands of devotees all year round, most notably during the Thaipusam festival.

So how and why exactly did the 400-million-year-old caves become the epicentre of Thaipusam for Malaysian Hindus? Well, it’s a pretty interesting story.

According to Liz Price in the Journal of Acheology Malaysia, Batu Caves got its name from the nearby Sungai Batu.

It has also long been a popular spot amongst the locals of Kuala Lumpur. In the 1880s, people would often have picnics there and explore the dark caves using candlelight.

Batu Caves’ popularity is credited to an American naturalist named William Hornaday, from the US National Museum, who came across the caves in 1878. He was out with an elephant hunting party in early July 1878 when the group was shown the caves by locals.

These locals were Orang Asli (who William Hornaday referred to as “Jacoons”) who revealed to the westerners that they would catch bats in the caves and also retreat into it for safety during certain seasons when the woods were overrun by wild elephants and other dangerous animals.

Guano (bat droppings) were also collected by the Chinese settlers from the 1860s as fertiliser.

As Batu Caves became a subject of great interest to Western archaeologists, they discovered that the caves had been known to locals since prehistoric times.

So once the British became aware of the majestic caves, it exploded in popularity. The hill was even gazetted by the British for public recreation in 1930.

Perhaps the reason why the iconic temple in Batu Caves is a literal dream is because, well, it was inspired by a dream!

One night in his sleep, an influential Indian merchant named K. Thamboosamy Pillai dreamt of the Hindu Goddess Sakti requesting that he build a shrine for her son Lord Murugan on top of Bukit Batu (Batu Caves).

When Thamboosamy went to the caves, he noticed that the main cave’s entrance was shaped like the spear (vel) of Lord Murugan and was inspired to dedicate a temple to the deity inside.

So in 1888, Thamboosamy and his friend, Kanthapa Thevar, placed a vel in the cave as a deity and Thaipusam was celebrated for the first time in Batu Caves in the following year.

Shortly after the founding of Temple Cave, a consecrated idol, or murti of Lord Murugan was placed inside.

However, in 1916, the British Collector of Land Revenue, AW Just, gave instructions to remove the vel and ordered Hindus to stop praying at the cave.

This led to a court case where the temple committee emerged victorious. The vel was reinstalled and the Hindus of Malaysia could continue their prayers at Batu Caves.

Wooden steps were then installed in 1930 and later replaced with concrete steps in 1940. Today, the 272 steps are instantly recognisable for their highly Instagramable rainbow hue.

However, the temple committee did get into trouble in 2018 with the National Heritage Department for painting the staircase without seeking prior approval.

The iconic concrete statue of Lord Murugan was added at the foot of the stairs in 2006 and the 140-foot tall structure is also the world’s tallest statue of the Hindu deity.

Why Thaipusam is celebrated at Batu Caves

Observed each year in January or February according to the Tamil calendar, Thaipusam comes from the amalgamation of two words – the Tamil month called Thai and a star named Pusam, which is at its highest point during the festival.

Thaipusam honors the Hindu god Lord Murugan and his victory over the demon Surapadman with his vel. It’s also believed that Thaipusam marks Lord Murugan’s birthday as well.

As the temple in Batu Caves is dedicated to this Hindu deity, combined with its natural beauty, it became the heart of Malaysia’s Thaipusam festival.

Hindu devotees from all over Malaysia would pay annual homage to Lord Murugan at Batu Caves and climb up the 272 steps to pray at its majestic temple.

They would make offerings and ask for the Lord’s forgiveness and blessings. This is when we can witness the spiritual pilgrims carrying kavadis – symbolic burdens which include elaborate body piercings.

Other forms of kavadis include fruits, flowers or a jar of milk. Some devotees also shave their heads.

There’s always a strange feeling of calm in me whenever I accompany my (kavadi carrying) family members into the the cave. The higher I climb the steps, the closer I feel to God. It’s tiring yes, but it’s all rewarding in the end.