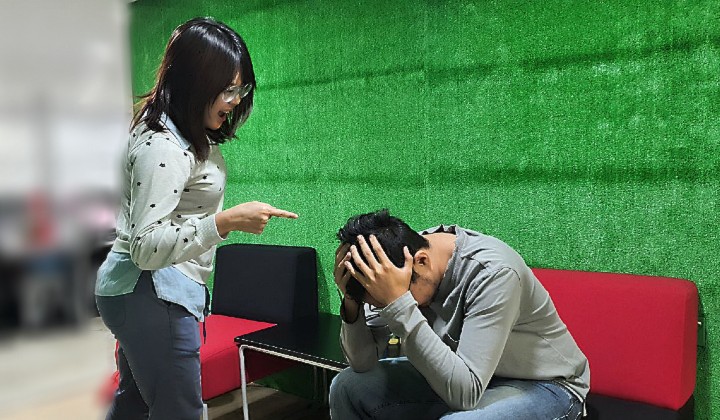 When talking about abusive relationships, most people might form a mental image of women battered and bruised from being physically assaulted by their male partners. But in reality, cases of domestic violence extends well beyond brute force and physical contact.

While it is common for women to make up the majority of domestic abuse cases and headlines here in Malaysia (and all over the world, tough luck ladies…), it shouldn’t be a surprise to learn that men can also be victims of domestic violence.

According to the Women, Family and Community Development Ministry, there has been a growing trend of domestic violence cases against men.

A large majority of those reports involve incidents of emotional and psychological abuse.

Unlike physical and sexual abuse which can leave visible marks and scars on a victim. Emotional abuse is harder to recognise but can be equally disturbing and traumatising to the person on the receiving end.

What is emotional abuse?

According to health psychology researchers, emotional abuse involves any nonphysical attitudes or behaviours that a person exhibits towards another (in this case an intimate or romantic partner) with the intent to control, subdue, isolate, or punish that particular person.

It can be simplified as any actions taken by an individual to assert and maintain power in a relationship through the use of intimidation, manipulation, humiliation and fear.

Emotional abuse happens when a person feels entitled and possessive of their companion and would use any means necessary to keep hold of that power dynamic of control over their partnerâ€™s lives.

Of Trauma and Men

Malaysian law does recognise the gravity and impact that emotional and psychological abuse has on a person.

In 2017, the Malaysian Domestic Violence Act was amended to expand the definition of domestic violence to include emotional injury and psychological abuse, as well as provide equal protection for both men and women.

International Medical University lecturer, Dr Nicole Chen Lee Peng as reported by the NST said that men would prefer to suffer in silence instead of face up to the stigma thatâ€™s associated with being victims of domestic violence.

And just like women, men who suffer through abuse are more than likely to stick with the relationship because of certain family, cultural or religious commitments.

In a report by The Star, Malaysian Mental Health Association president Datuk Dr Andrew Mohanraj explains that men generally would stay with their abusive partners out of shame of being ridiculed as weak and unmanly.

How to spot emotionally abusive behaviour?

Emotional abuse is often subtle, and those who are suffering from it may not know that they are being ill-treated.

This is generally because an emotionally abusive partner would showcase actions that, at first glance, appear caring and nurturing, in order to take advantage of their partnerâ€™s vulnerabilities and insecurities.

Below are some of the toxic behaviours that are prevalent in an emotionally abusive relationship;

Abusive partners would think of themself as better than their companions, doubting their abilities and blaming the other for any problem that arises in the relationship.

They would also take verbal jabs at their partner by belittling or humiliating them either out in public or in a more personal setting and masking the insults as mere jokes and sarcasm.

An emotionally abusive person would set unreasonable expectations and demands on their partner, expecting them to cater to their every need.

Abusers would aggressively want their partners to pay attention to them and only them, at all times and be overly clingy and protective of their companions.

They would also be dissatisfied by their partnerâ€™s actions and criticise the other having different opinions and not meeting their standards.

They would isolate their partners from other people, and be overly jealous and possessive of the other person, watching their every move like monitoring their phone calls and social media, following them everywhere they go or even holding on to their money.

Emotionally abusive partners would be dismissive and judging of their partnerâ€™s thoughts and feelings, saying that the other person is merely exaggerating.

An emotionally abusive person would also manipulate their partner by â€œgaslightingâ€ them, making the other fall into a cycle of doubting their perception, self-worth and identity.

Though arguments and misunderstandings are normal in any healthy relationship, emotionally abusive people would just start a fight for the sake of it.

The would also hold heir partners â€œhostageâ€ by using emotional blackmail to manipulate them with shame, fear and guilt to do anything they want.

A common example of this would be when an emotionally abusive person would threaten to hurt or kill themselves if their partner attempts to put an end to the relationship.

Abusers would also have drastic mood swings and behave unpredictable and erratic.

There’s no question that emotional and psychological abuse is a serious public health issue.

Those tortured by emotional abuse can be left with feelings of isolation and trapped with feelings of uselessness, helplessness, anxiety, depression or in extreme cases, destructive thoughts of self-harm and suicide.

If you or anyone you know is a victim of emotional abuse please reach out and seek help.

Contact the 24-hour Talian Nur hotline at 15999 for immediate assistance and support or check out TRPâ€™s complete guide to counselling and therapy services in Klang Valley, HERE.