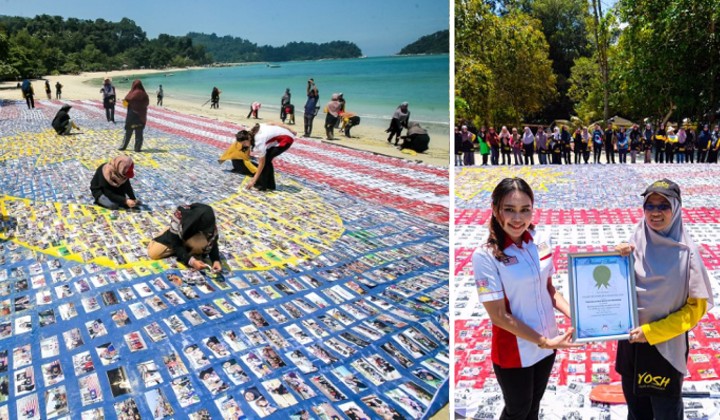 Over the weekend (August 17), 123 volunteers came together in Pulau Pangkor and put together 21,000 pictures on a Jalur Gemilang by the beach.

A Jalur Gemilang measuring 27.3 metres by 12.2 metres was used for the photos to be placed on. (27 metres is like the length of 2 buses put together).

Photos used were of memories of the volunteers with the Jalur Gemilang during various events held by the Malaysian Muslim Welfare Fund Foundation (YDKMM).

Programme Director, Izzatul Athirah An-Nur Mohd Hizul Azri, explains that it took them 3 months to collect the pictures from members all over the world.

There are pictures of members with the Jalur Gemilang at events as far as Central Africa, Egypt, and Japan.

The YDKMM volunteers actually had beaten an old record which used a Jalur Gemilang measuring only 22 metres wide and 10 metres long.

Malaysia Book of Records (MBOR)’s research officer who witnessed and verified the patriotic endeavour presented the volunteers a certificate for their achievement.

The Jalur Gemilang came a long way to where it is today, read our article on how it first came about here.