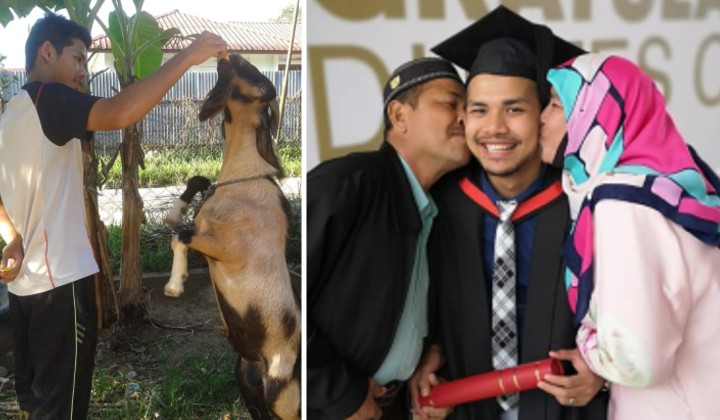 A Kelantanese shepherd-boy, Muhammad Afiq Ismail who recently graduated with first-class honours from the University of Essex, United Kingdom (UK) in Accounting and Finance caught the attention of the internet with his ardous journey to success.

Afiq, who is the youngest of two, comes from a rural village of Kampung Batu Mengkebang and was sent to boarding school from the early age of 10 years old because his father wanted to make sure he would get the best education.

His father, Ismail Abas only did odd-jobs around the kampung, but he worked hard to fork out RM300 a month to pay for his son’s boarding school fees.

So, whenever Afiq was free, he had accustomed himself to helping his father doing whatever job he could do, from harvesting palm-oil to rearing sheep to manning the local sundry shop. He did it all.

Afiq was also the only son who could help his father out to earn some extra cash for the family as his mother is a housewife, and his elder brother is differently-abled.

When Afiq secured a place in the University of Essex in Great Britain, his father celebrated Afiq’s achievement with the whole village by sacrificing a cow AND a sheep to show how grateful they were.

No one from their kampung has ever made it to the UK.

Especially since no one in their village is able to speak a word of English.

After getting a place at the university, Afiq was absolutely determined to work part-time during his degree so that he could fly his parents to the UK for his graduation.

Afiq worked hard as a cleaner at the university to fund his parents’ flight.

I wanted to work hard and earn money. Mom and dad have never flown in an airplane before. I wanted to pay for their ticket to come here.

This is my present to them for raising me until I successfully finished my studies.

When his parents came to the UK, they had to be accompanied by a friendâ€™s parents, as his parents did not speak nor understand English at all.

Afiq’s parents had to initially take a bus from Kuala Krai (the nearest town to their village in Kampung Batu Mengkebang) to Kuala Lumpur, and then stopped by at their relativeâ€™s house before flying from KLIA to Abu Dhabi for transit. They then flew from Abu Dhabi to Heathrow Airport (They travelled a total of about 11,000km in distance. Yes, we googled it).

Speaking to Afiq, we found that he is truly a humble soul. He credits his success to his motherâ€™s prayers.

My mother is the reason why I can go this far. And you need to have a good relationship with Allah as well. Also, surround yourself with good friends that help each other.

He is currently in the UK (still working) to collect a little bit more money before he comes back to Malaysia for good at the end of the month.

His parents had just touched down in KLIA earlier today, and are excited for their son to start working at one of the major companiesy in KL in October.

People on social media are applauding him.

Congrats Muhd Afiq! I don’t know who you are, but I am so proud of your achievements. Congrats weh!!

You can read the full story here by Khairul Aiman on Facebook.

Doesn’t Afiq’s story make you reevaluate your life and count your blessings?Â