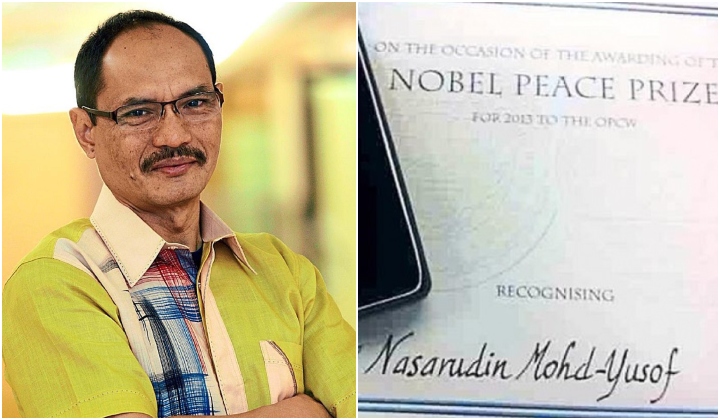 When you think of the Nobel Peace Prize, numerous great names come to mind like Mother Theresa, the Dalai Lama and Malala Yousafzai. But did you know that a Malaysian name is also included in this select list of luminaries?

Yes, this Malaysian is now among the 135 Nobel Laureates and was awarded the Nobel Peace Prize in 2013 for his team’s “extensive work to eliminate chemical weapons” at the Organisation for the Prohibition of Chemical Weapons (OPCW).

Established in 1895, the Peace Prize was to be awarded to the person (or organisation) who had done most for “fraternity between nations, for the abolition or reduction of standing armies and for the holding and promotion of peace congresses”. It is awarded by a committee elected by the Norwegian Parliament (Stortinget).

Naturally, Mohd Nasarudin Mohd Yusof was overjoyed by the recognition and told The Star in a 2014 interview that all he wanted to do was to make Malaysia proud of his service.

When you work overseas, no matter how small it (your work) is, you are carrying your country’s flag.

The chemical weapons and munition specialist also hoped that his team’s win would spur young Malaysians to achieve the country’s dream of winning the Nobel Prize in other cultural and/or scientific advances.

His work helped establish the framework to eliminate chemical weapons in the Syrian Civil War.

The 59-year-old retired Malaysian Armed Forces personnel moved to The Hague, Netherlands in 2011 to work with the OPCW – an intergovernmental organization established in 1997 and comprised of 193 sovereign states and serves to oversee the elimination of chemical weapons of its member states.

The Nobel Peace Prize was awarded months after the Ghouta chemical attack in Syria, where two opposition-controlled areas in the suburbs around Damascus were struck by rockets containing the chemical agent sarin. Sarin is a human-made chemical warfare agent classified as a nerve agent – the most toxic and rapidly acting of the known chemical warfare agents.

In a press release, the Norwegian Nobel Committee underlined the need to enhance the efforts to do away with such weapons.

Chemical weapons have subsequently been put to use on numerous occasions by both states and terrorists.

Since 1997, the OPCW has, through inspections, destruction and by other means, sought the implementation of the convention. It is also the most successful disarmament treaty eliminating an entire class of weapons of mass destruction.

More than 98% of all declared chemical weapon stockpiles have been destroyed under OPCW verification.

Nasarudin and his team at the OPCW were instrumental in aiding the United Nations investigation which led to United Nations Security Council Resolution 2118. This was adopted unanimously on 27 September 2013, and the resolution laid the Framework for Elimination of Syrian Chemical Weapons during the Syrian Civil War.

Under the Resolution, Syria had until mid-2014 to destroy its chemical weapons arsenal and the Resolution also outlines plans for a transition. Despite a few hiccups, the OPCW reported that the destruction was largely on schedule.

However, on 12th April 2021, the OPCW released the findings of the second report by its Investigation and Identification Team (IIT), saying that “at least one cylinder” of deadly chlorine gas had been dropped on the night of 4 February, spreading “over a large area” and affecting at least 12 Syrians on the ground.

And so, the fight continues but with Nasarudin at the helm, we’re proud of the Malaysian’s role in helping innocent people terrorised by war.