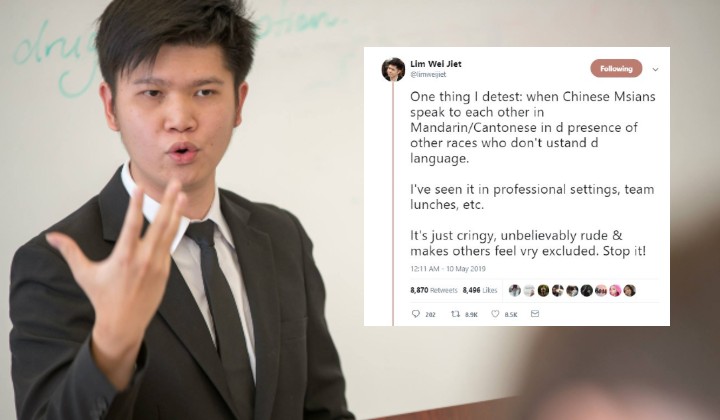 A young lawyer, Lim Wei Jiet, caught the attention of Twitterjaya over the weekend.

This after he tweeted that he personally hated it when people speak in their mother tongue while in the presence of other people who may not understand.

However, he stressed to us that the tweets are made in his personal capacity and unrelated to his post in HAKAM.

It’s pretty clear that almost everyone in Malaysia has been on multiple sides of this situation at some point.

Netizens also replied his tweet with their own experiences.

Happens all the time! Worse is those speaking in Malay, Mandarin or other languages in front of foreigners. It’s remarkably bad mannered. It’s even more deplorable when you do this to say things about the person who’s excluded!

Always an alien during team lunches 😔😔 or even work discussions. So most of the time i just put on my earphones so i’ll be less lonely 😳😳

After seeing his tweet garnering a crowd of replies, Lim then added a thread to his tweet.

In his following tweet he asks those who face such situations to stand up and not tolerate such disrespect.

To Chinese Msians, let us pledge: if such scenario arises, speak up. Insist d group to speak BM/Eng.

Stand up up for yur non-Chinese friends/colleagues. Don’t tolerate such disrespect.

Netizens are again agreeing with Lim.

Yes i thought the same too. And when my Chinese friends converse in Mandarin when my Malay/Indian friends are around, i wont participate in their conversation. Very rude and can further widen the gap between us.

Not only chinese, other races too. Even in my workplace during meetings we have to remind them to speak in a language that everyone understands. One day i got annoyed and started speaking punjabi, and i had their attention. LOL

Our Prophet Muhammad ï·º taught us not to do this, he said â€If there is a group of three, then let not two of them be in conversation to the exclusion of the third.â€… and also language that everyone can understand is included

Some are even thanking him for bringing up this issue and raising awareness of this phenomena.

thats so kind and thoughtful of you. thank u so much bro 🙂

Thx bro for raising up this point..we r all Malaysian anyway..

Whilst some guilty ones tweeted their apologies.

Guilty as charged. I’m sorry I will change

Regardless, Lim feels that no one should feel excluded in 2019 over such a gaff, and hopes for a change.

Tbf, there r many stories of how Chinese friends have spoken up or, at least, helped to translate. Many realise dis is wrong.

But dis can’t go on. We need a big shift in our education system & work culture. Any Msian shouldn’t feel excluded when talking 2 each other in 2019.