Traditionally enjoyed neat or on the rocks, Bisquit & Dubouché Cognac is aromatic, smooth and mellow. 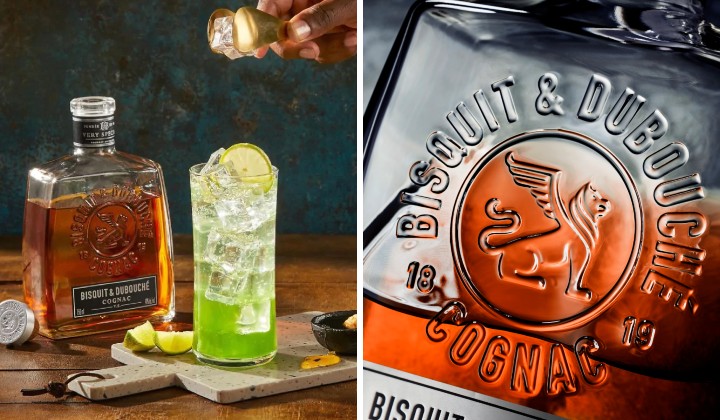 Whether you’re a Cognac aficionado or new to this dark spirit, an exquisite sip of Bisquit & Dubouché is what you should be reaching for and drinking now.

Flawless in cocktails, with citrus, fresh herbs and other mixers, the story of B&D started 200 years ago.

Bucking long-held traditions, the pair forged a new path for their unique cognac with an innovative approach to distillation.

Alexandre founded the brand in 1819 at just 20 years old, becoming one of the first in the industry to adopt bottling under his name.

Descended from a family of distillers who had been creating cognac since the 1700s, Alexandre was the innovator behind a radical distillation process.

Can you name the "big four" Cognac firms in France?

His method relies more on emotion and intuition than conventional procedures and technical methods.

Shortly after creating his Cognac brand, Alexandre crossed paths with Adrien Dubouché, who married Alexandre’s daughter in 1849, and the two went into business together.

Adrien was passionate about all forms of travel and art, travelling to China often to collect the finest porcelains.

A creative and bohemian type, Adrien designed one of the first logotypes for the renowned cognac brand.

Together, Alexandre and Adrien continued to build the brand.

By the end of the 19th century, Bisquit & Dubouché was the third most exported cognac in the world.

It was popular among global rabble-rousers and celebrities like Joséphine Baker, one of France’s most important American entertainers between the 1930s and 1960s.

To pay tribute to the iconoclastic founders, beginning in March 2020, Alexandre and Adrien will be reunited on the label of the bottle – “Bisquit & Dubouché,” as it was originally named.

A new, sleek, contemporary bottle and metallic silver and black accents adorning the label will represent the progressive spirit of its founders.

Along with a new look a feel, the brand’s symbolic griffin, part lion and part eagle and established as the “guardian” of the first cellars where the precious liquid aged – has been redesigned to properly signify its boldness.

Bisquit & Dubouché Cognac has such a rich heritage, and a true rebellious streak that goes directly back to its fearless founders.

The goal of returning to the original name and reimagining the bottle and label was to capture that spirit.

Vincent explained that it is also to properly represent exactly how Avant Garde’s approach to cognac making was at the time and still is today, making this a truly unique cognac.

He said the unique art and craft of Bisquit & Dubouché cognac undergo traditional double distillation in a copper pot from November to March, producing its hallmark ‘eau de vie.’

A Cognac Unlike The Rest

But that’s where the similarity to other cognacs ends as Bisquit & Dubouché eau-de-vie relies on intuition and knowledge rather than technical methods, extending extraction during heart collection compared to traditional cognacs.

The distillers wait for the precise moment to cut, guided by deep knowledge and intuition while continuously tasting and smelling the liquid.

This guarantees that it has the signature Bisquit & Dubouché aromatic notes with strong floral and fruity concentrations.

They retain the “heart” of the cognac longer than other traditional cognac brands and only cut the “tails” by hand at the very end of the process.

This is a method that requires the highest mastery and patience and is achievable only with years of practice.

The acquisition expanded the company’s portfolio in the premium Cognac category amid a surge of interest in cognac as premium spirits rise globally.

Bisquit & Dubouché generates an imitable cognac renowned for its smoothness and floral and fruity bouquet of nuanced aromas.

The taste encompasses a seductive aroma of vanilla and caramel and is broadly described as fruity with a subdued smoothness to its profile with specific notes of honey, fig and dark fruits.

In 2018, the V.S.O.P and the limited-edition Bisquit Interlude blend won a Gold “Outstanding” medal.