The ‘No Plastic Bag Campaign’ is seen as failed in reducing plastic pollution in the country. 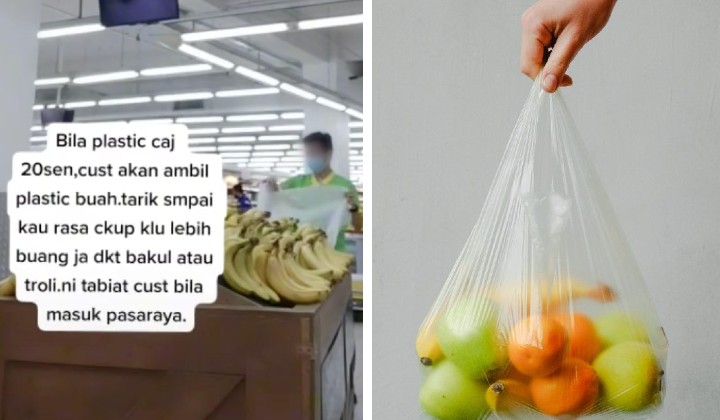 People in Selangor, Pulau Pinang and Johor are familiar with paying 20 sen for plastic bags when shopping.

The respective state governments impose the 20-cent charge to educate the public on reducing the use of plastic bags and saving the environment.

However, some ‘creative’ shoppers have found a way to avoid paying the 20-cent by using plastic bags for fruits provided free of charge.

Recently, a video went viral on TikTok where a shopper was ‘caught red-handed while in a supermarket.

In the video, the shopper was seen taking a number of fruit plastic bags.

The act was recorded by a TikTok user @maruvissv, who is understood to be an employee of the supermarket.

@maruvissv commented that is common to see shoppers take as many fruit plastic bags as they like.

If there are leftovers, shoppers dump them in the basket or trolley.

He pleaded with consumers not to resort to such practice as it would mean more work for supermarket workers.

Meanwhile, netizens said it’s only natural that people will take more than they need when it comes to free stuff.

Some even said they would not mind doing the same now that they are aware of it.

Not Achieving Its Objectives

A total of RM6 million was collected since Selangor implemented the ‘No Plastic Bag Campaign’ campaign starting January 1, 2017.

The monies would be used for public awareness campaigns and educating the public to reduce the use of plastic bags, which are the cause of environmental pollution.

However, public awareness of environmental pollution is still low because many people would not mind paying the 20-cent.

Say “No to plastic bags” but yet plastic bags are being sold at 20 sen each. What rubbish move is that?

Questions had also been raised on where the money collected went to.

At the same time, some supermarkets and other business outlets have replaced plastic bags with alternatives such as environment-friendly or biodegradable bags.

A minister had previously suggested that every supermarket or retail outlet declare the amount collected from the sale of plastic bags.

In 2019, Penang stepped up the game by prohibiting plastic bags in Penang on Mondays even if consumers pay for them.

Nearly half of all plastic products are discarded after a single use and take up to 1000 years to disintegrate.

A 2019 study commissioned by the World Wide Fund for Nature (WWF) showed that Malaysia ranks second in Asia for annual per capita plastic use.

At 16.78kg per person, Malaysia outranks much larger nations, including China, Indonesia, the Philippines, Thailand, and Vietnam, in generated waste.

This has resulted in many detrimental environmental effects, including animal choking, pollution, blockage of channels, rivers and streams, and landscape disfigurement.

READ MORE: Malaysia’s Plastic Problem Everyone Forgot – What You Can Do About It

According to the National Solid Waste Management Department, each Malaysian generates about 1.17kg of waste daily.

Approximately 90% of the waste goes to landfills, while only 10.5% is recycled.

Some consumers take the issue seriously and devise creative ways not to use plastic bags when shopping.

Going Jalan-Jalan? Skip The Traffic And Just Take The Train Directly To These Malls!