The cars behind her impatiently honked while she was at her wit’s end. 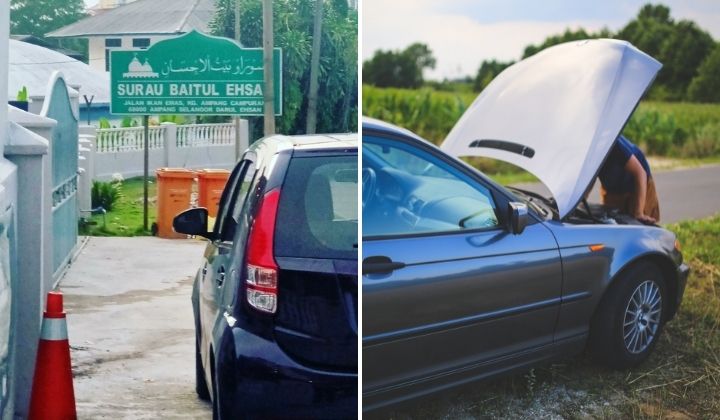 A car coming to a standstill on a busy road can be stressful. Unfortunately, this happened to Twitter user Letchumy (@TKLetchumy) after picking up her children from school and her mother-in-law’s house.

They were on the way home when the car suddenly stopped, although the engine was still running.

The vehicles behind her had already started honking loudly to ask her to move. A bus behind her honked loudly and tried to pass too. She panicked and called her husband for help.

It was also near time to break fast, around 7.10pm, so a motorcyclist approached her.

She looked around and realised there was a surau nearby and the motorcyclist was just about to leave the place when he saw her.

What happened miss? Is it spoiled? Manual or auto?

Letchumy said she felt relieved when he asked her that question. He got down from his motorcycle and tried to restart the car for her to no avail.

He reassured her that it was alright and they’ll help to push the car to the roadside.

Don’t stand on the road miss. Dangerous. Bring your children to the surau.

He called some people from the surau to help push the car. While waiting in the surau, Letchumy and her children were given soya drinks and mineral water.

They also asked Letchumy permission to break fast. Some of them stayed back and waited for Letchumy’s car to be fixed before leaving.

Letchumy said she felt touched and thanked all the kind people at the surau for helping without seeing race.

Netizens said they love hearing uplifting stories about Malaysians like these and said the incident showed the true Keluarga Malaysia spirit.