Twitter user Shameil was shocked to find his images being presented online as the B40 student in the UiTM drama. 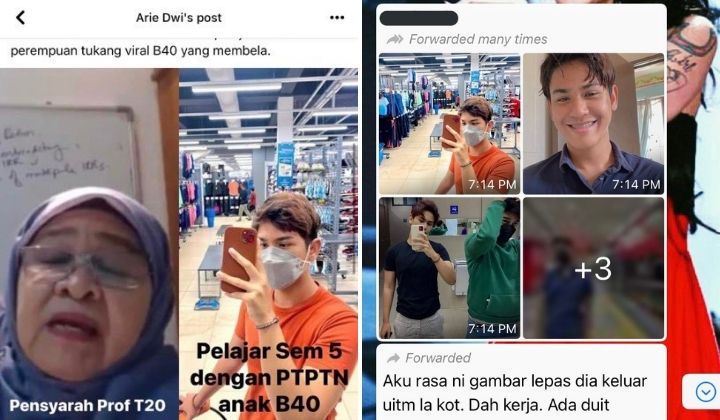 The drama between a lecturer from Universiti Teknologi MARA (UiTM) demeaning a B40 student for not owning a laptop has triggered a debate online among netizens.

Just today, UiTM has officially released a statement to say they would be putting the lecturer on leave for the time being.

READ MORE: UiTM Professor Has Been Suspended Starting 1 April Until Investigation Is Complete

However, the drama still continues due to mistaken identity.

A Twitter user @Shameil_ alleged that someone on Facebook has used his pictures to claim that he’s the B40 student in question who got the lecturer into trouble.

Shameil asked whoever used his pictures to spread the rumours to stop immediately and said he’s ready to fight, presumably to get his identity and reputation back.

The Facebook user Arie Dwi Andika II allegedly used Shameil’s picture that showed Shameil taking a selfie with an iPhone in a store.

Unfortunately, netizens who fell for the scam continued to give their opinions regarding Shameil’s character. They called him a hypocrite and said his behaviour was disgusting.

In another screenshot, several pictures of Shameil were shared in a chat group. Someone replied in the chat saying the pictures probably showed the B40 student once he was out of university and was earning money.

The next screenshot showed a netizen telling Arie that he used the wrong picture in his post.

However, Arie responded and said it was just a picture used for illustration purposes on social media.

Time to lodge a police report

Some netizens were shocked at how fast the slander spread online and advised Shameil to lodge a police report to clear his name.

A few of them told Shameil to report to the Malaysian Communications and Multimedia Commission (SKMM) and sue the rumour-monger as well.

However, the mystery grew ridiculous when a netizen dug deeper into Arie’s profile and discovered that he was a graduate in law enforcement and investigation.

Another netizen wondered how Arie investigated and still got the wrong person.

Someone else pointed out that Arie has deleted the Facebook post but urged Shameil to continue to file a report for slander.

Since it’s April’s Fools day today, it’s not made known yet if it was indeed a prank gone wrong.

That said, some pranks cease being funny when it goes too far and ruin someone’s reputation.

Hopefully, Shameil will be able to resolve this issue soon.