Malaysians noted that the price of chickens have increased to more than RM10 per kilo in some places. 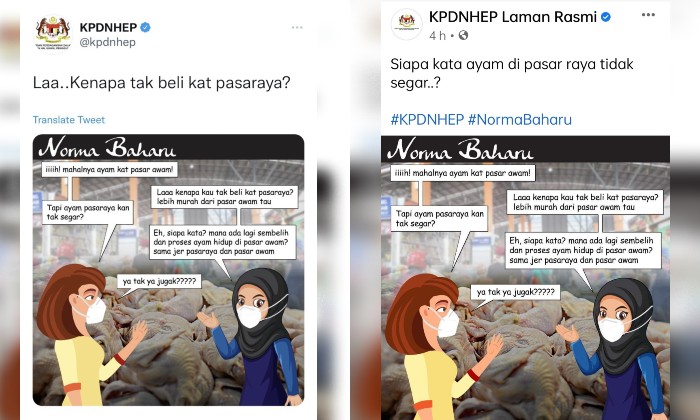 The Domestic Trade and Consumer Affairs Ministry (KPDNHEP) is taking some heat for a social media PSA it posted, then later deleted, about chickens.

With a caption that read, “Laa, Why didn’t you buy it at the supermarket” on Twitter, and “Who said chickens from the supermarket aren’t fresh,” on Facebook, the ministry had shared a comic strip to provide the public with more information about poultry and a consumer right to choose where to shop. Which goes something like this…

The comic, however, did not sit well with netizens who accused the Ministry of Trade and Consumer Affairs of being out of touch with the affairs of consumers and traders.

Giler. Is KPDNHEP seriously siding with capitalists and discouraging people from buying from small owners now? What a sight???

This is not what u supposed to do @kpdnhep, why make the rich richer and poor poorer. #distasteful https://t.co/vqUmp96MtB

Even #KPDNHEP asking consumers to buy from pasar raya but how about the lifehood of pasar awam?

The PSA also notably inspired some parodies from netizens who had some sense of humour.

Reportedly, Malaysians have noted a steep rise in the price of chickens – with some places selling em’ for more than RM10 per kilogram.

In a statement, KPDNHEP explained that it was working on solutions to combat the chicken price hike by monitoring and engaging with farmers, wholesalers and traders.

The ministry also intends to introduce a price ceiling for necessary goods, similar to what we now have during the festive seasons.

It explained that the ministry would not hesitate to implement price controls if they increase too rapidly or if there exists a cartel that is manipulating prices within the supply chain.

KPDNHEP’s surveys across the country determined that the average price of processed chickens, nationally, as of 10 September, was at RM8.83 per kilo.

The price of standard processed chicken in the Peninsular was RMRM8.78 per kg and ranges between RM5.99 per kilo to RM11.00 per kilo.

In East Malaysia, the standard price for processed chickens ranges between RM10.90 per kg and RM11.80 per kilo in Sabah, while in Sarawak, the price was between RM7.50 per kilo to RM9.80 per kilo.

The ministry added that it would continue to monitor and take action against those found to manipulate the price of goods.

In a later posting, which wasn’t deleted this time, the KDNHEP quoted its Minister Datuk Seri Alexander Nanta Linggi in saying that consumers must be smart in choosing where to shop for the best prices.