Traffic on the E8 began increasing on Saturday. 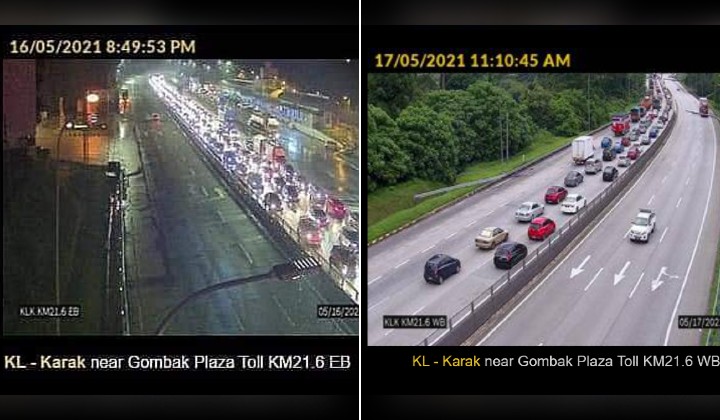 CCTV images allegedly taken near the Gombak toll plaza on the Kuala Lumpur–Karak Expressway (E8) captured a trail of vehicles caught in a traffic jam heading into the city on Sunday (16 May) evening till past midnight.

The Malaysian Highway Authority’s (LLM) live traffic reports showed slow and subsequent heavy traffic picking up on the E8 on Saturday and Sunday – near Genting Sempah and the Gombak toll heading towards KL.

Prior to the Hari Raya holidays, LLM reported heavy traffic heading out of Klang Valley towards the east coast of the peninsula.

Traffic in KL also reportedly dropped by as much as 50% during the holidays.

Discussions on social media reveal that the public is generally angry, scared and disappointed over the number of vehicles seen entering KL despite the enforcement of the nationwide MCO and a strict ‘no balik kampung’ rule made by the government.

Some concluded that the heavy traffic was caused by the ‘balik KL’ crowd who are returning to the city after Hari Raya – allegedly breaking state and district travel restrictions in the process.

Malaysia is honestly one big ironic joke. keep barking “kerajaan gagal” here and there but not playing their part at literally just staying the fuck home. instead of having teamwork from both government and people, you’re just expecting the government to do everything.

If you’re one of the many going back to KL/Selangor after celebrating eid in other states, you don’t have the right to complain about lockdown, online classes and PKP restriction.

Authorities, however, established that many of the travellers caught during the weekend traffic had official travel permits.

Overall, only 22 compounds valued at RM5,000 each were issued to travellers entering KL without paperwork during roadblocks set up at the Gombak toll.

Gombak Police Chief Arifai Tarawe explained that the viral traffic jam was only 3km long and wasn’t as bad compared to normal festive season traffic there – that would stretch up to 30km even without roadblocks.