Malaysia’s favorite son shares a tale about educating his own son on Ramadan, respect and tolerance. 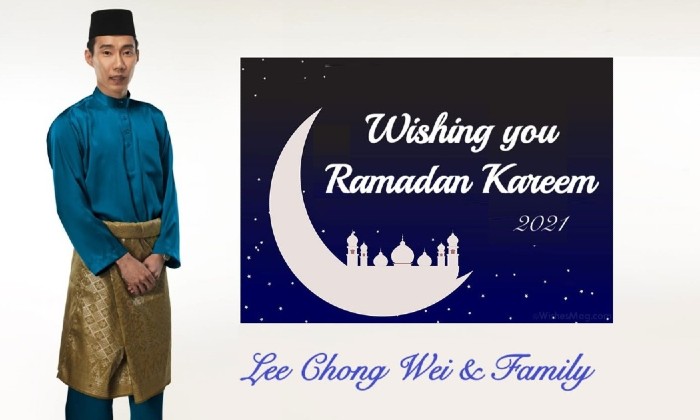 Living in Malaysia is a life of tolerance, preached national badminton star Datuk Lee Chong Wei when confronted with an interesting question about Malays, Muslims and the month of Ramadan by his eldest son, Kingston.

Eight-year-old Kingston or ‘Koko’ as his family affectionately calls him, had asked his parents why his Malay friends did not join the others for lunch during recess hour at school.

“At recess, my friends and I shared food and drinks. But my two best friends, Syihan and Amil didn’t want to eat. Why?” wrote Chong Wei on Facebook, reenacting the conversation between himself, his wife Datin Wong Mew Choo and their inquisitive child.

The boy had wondered out loud why the teacher had told him and his classmates to eat separately from some of their friends and if he had done anything wrong to warrant such action.

Chong Wei went on to explain to Koko the significance of fasting for Muslims during the holy month of Ramadan.

“You haven’t done anything wrong. Your friends have started fasting and the teacher asked you to eat by the corner to show respect for your friends,” professed the father, admitting that he had failed to properly educate the boy regarding the subject.

He continued by saying that Koko must learn to be tolerant of others and help get his friends to show support for their Muslim buddies who are fasting.

Having a little fight in him, Koko challenged his father’s ideals and wondered why he should care about what other people do.

“I eat on my own, their fasting, it’s their problem,” said the child. But before Chong Wei could reply, his wife Mew Choo – who’s also a former national badminton player – stepped in to teach their son a quick lesson.

“Before I could get angry, Mew Choo’s hand had already swiftly landed on my son’s arm. I’m well aware that she can land a smash, but this was fast.”

The mother went on to tell Koko, who was said to be crying at this point, that tolerance and unity works out for everyone’s benefits, in a way that a child would understand.

If we didn’t tolerate each other, you won’t be friends with Amil and Syihan. Imagine if we were intolerant, you’d get yelled at if you play fireworks during Chinese New Year. Your Indian friends won’t get to have their Thaipusam parades. If we don’t respect each other, it would be impossible for shopping malls in KL to have Christmas trees for Christmas. We won the Thomas Cup was because of tolerance and unity.

Needless to say, little Koko learned a valuable lesson that having respect and empathy for others makes for a colourful life, such as the one we enjoy here in Malaysia.

You can check out the Chong Wei’s family drama for yourself on Facebook.