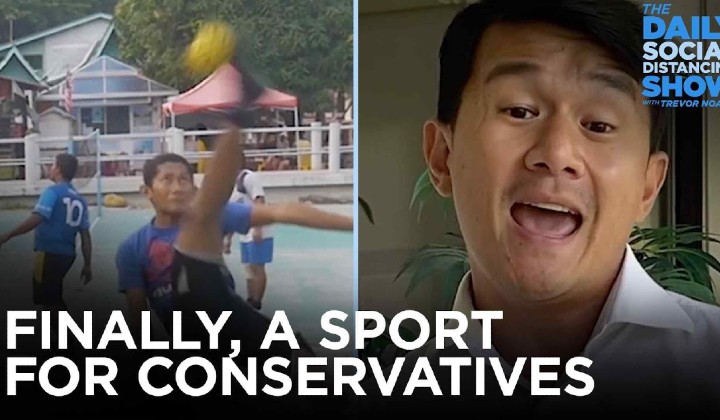 US-based Malaysian comedian Ronny Chieng has brilliantly introduced our culture to the Americans while not-so-subtly schooling them on voting rights.

In a short clip titled “Sepak Takraw: The Perfect Sport for Conservatives” on The Daily Show, the Malaysian Senior Correspondent called out to American conservatives, saying: “Are you tired of these woke sports leagues? It’s time to start watching sepak takraw!”

While his pronunciation of the word is, uh, questionable (it’s say-pak tak-raw not see-pak takraw) he does go on to praise the Southeast Asian sport pretty well.

“You think they give a sh*t about Brian Kemp suppressing the vote? Hell no, all they care about is kicking the ball over the net, ” he exclaims, referring to a controversial law signed by the state governor of Georgia that is a sweeping overhaul of state elections and includes new restrictions on voting by mail and greater legislative control over how elections are run.

“And look at this sh*t,” he continues. “It’s literally more impressive than anything Tom Brady can do.”

Tom Brady is a pretty popular American football quarterback who just won the most recent Superbowl.

But the kicker comes when Ronnie promises the American audience that by just watching one game they’ll soon be screaming, “Mengundi itu hak asasi manusiaaaa!” which translates to “voting is a human right!”

He goes on to explain that how disillusioned republicans will be relieved that the sepak takraw players have never heard of US Congresswoman Alexandria Ocasio-Cortez, and they also don’t really speak English so the Americans will have no clue if there’s a political discourse going on.

And if that’s not enough, maybe caring about the culture of Southeast Asia will help mitigate your guilt about supporting a racist president who demagogue China, leading to increased violence against AAPI people in America.
And if not, hey check it out, they can do trick shots!

Hey conservatives, are you tired of woke sports leagues getting involved in politics? Check out Sepak Takraw! pic.twitter.com/MJT3fnPCPA

“At Least You’re Not Fishing In A Storm Drain”, Comedian Tells Malaysians To Te Grateful, But It Backfires

Harith Iskander Apologizes For His Remarks On Armed Forces’ Roles