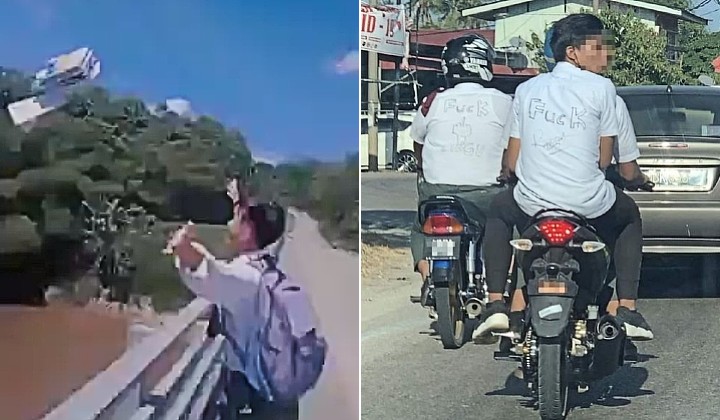 Malaysians weren’t too pleased by the, let’s call it, immature antics of several secondary school teenagers who were caught misbehaving on camera.

In one video that received viral attention on social media, a teen was accused of “chasing clout” for having thrown away his school textbooks over a bridge and into a river.

Seen complete in his white and green uniform and backpack, the teen was reprimanded for polluting the river besides disrespecting what netizens feel to be tomes of knowledge.

Others also accused the teen of being wasteful with items that could have been, in their own words, resold, donated or recycled.

Another episode of youth angst also managed to raise criticism online when two other teens were caught fashioning undesirable messages on their school uniforms.

Images shared on social media saw the teens riding motorcycles while having graffitied, the world “fu*k” and “fu*k teacher” in bold letter on the back of their shirts.

Netizens had accused the teens of being disrespectful, with some believing the act also diminishes a memory which many hold dear – as it’s been a longtime tradition for some to have their school uniforms stained with autographs and notes from friends and teachers before graduating, like how you would sign a yearbook.

The teens’ unsavoury language had even caught the attention of the Malaysian Muslim Teachers’ Association (iGuru) who wanted them disciplined for their actions.

Their actions were rude, immoral and reflect a generation that lacks spiritual values.

While these actions do show a lack of wisdom, considering what our students were put through during the 2020 pandemic-riddled school semester, it’s in this writer’s opinion that it might be best not to use them as an example to pass judgment on an entire generation for being rash in their youth.

Especially since the phrase “Kids these days, I tell you…” was probably said about our generation at some point, regardless of which generation we belong to.