The mother says she was struck by a moment of desperation. 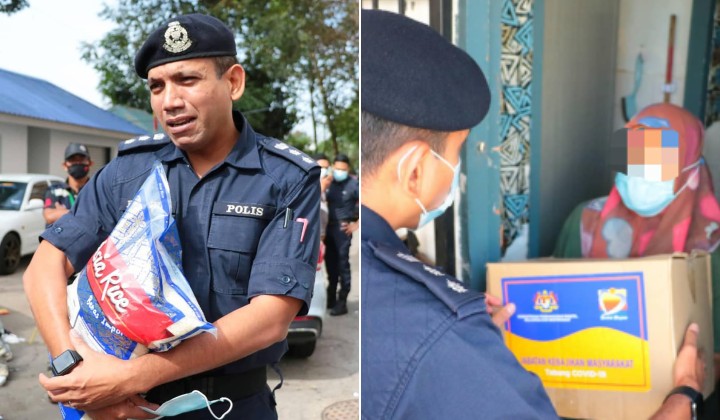 A mother of three who was caught shoplifting at a hypermarket in Petaling Jaya got a surprise visit from the PJ police chief himself who came to her home bearing gifts instead of handcuffs.

In a touching video released by the PJ police department, 36-year-old Norhidayah Hamid was visited by PJ Police Chief ACP Nik Ezanee Mohd Faisal who came to deliver some supplies donated by the Welfare Department (JKM) and gave the mother some kind words of comfort.

In the video, the Cheif with an entourage of other officers was welcomed by the mother and her kids.

“If you are truly desperate, come to the police station at any time,” said the Chief before moving to speak with the audience and explained that the Covid-19 pandemic has been hard on everyone.

We must be patient with this MCO (Movement Control Order). There are many of us who complain that they cannot brain the reason why police do roadblocks, why police closed the roads, why there are traffic jams. Actually, ladies and gentleman, you are not the only ones who are in trouble.

Speaking to reporters, Norhidayah confessed that her brush with crime came as a last resort from desperation and having no immediate family members to turn to.

According to FMT, Norhidayah had recently lost her job working as a babysitter and her husband, who worked as an elevator repairman, wasn’t receiving that many jobs now. Her youngest child was also sick at the time.

I did not tell them I was facing financial difficulties because they already have their own set of problems. How could I expect them to help me? I only had RM50 in my pocket, and Koolfever (fever relief pads) are expensive. At that moment, I lost all ability to think and just stuffed it with some cakes into my bag. I was thinking of using the RM50 to buy food.

Police had classified her case as “no further action” and told the mother not to repeat her reckless action.