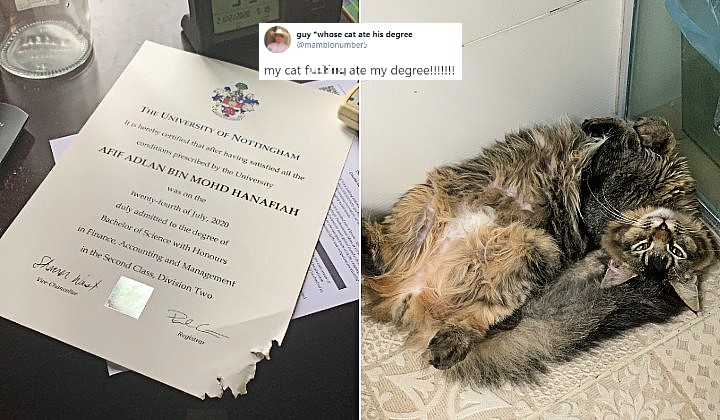 A graduate from the University of Nottingham Malaysia attempted to publicly reprimand his furry feline friend on social media after it had supposedly chowed down on his bachelor’s degree certificate.

Calling himself the “guy whose cat ate his degree”, Afif Adlan Mohd Hanafiah took to Twitter to express his disapproval towards “Mika” – his grey-coloured pet cat that had decided to turn the formal document into the purrfect snack.

“Of all the useless papers in my room, he ate my f****ng degree WTF! It’s like he f****ng knew,” wrote Afif Adlan, sharing pictures of his degree that had its bottom-right corner munched off by the monster, along with an image of the culprit itself.

Netizens were mostly unsurprised by the cat’s destructive nature

The cat:
Did you die though???? pic.twitter.com/y1Q9tGFfbX

You: did you eat my degree?

While others took to share and shame their own pets who had also nibbled on their certificates.

My dog ate mine the week before I had to leave to go to another country and submit it as proof to complete my registration for a graduate program pic.twitter.com/PAbi4QYsvj

Luckily for Afif Adlan, the University of Nottingham took notice of Mika’s misdeeds and promises to have things sorted out by next year.

Didn’t realise our degrees were so tasty. I’m purrfectly sure we can sort something out (re. the certificate, not the behaviour of your cat ). The Uni is closed until 4 Jan, I’ll speak to our Graduation team when we’re back. ^Anne