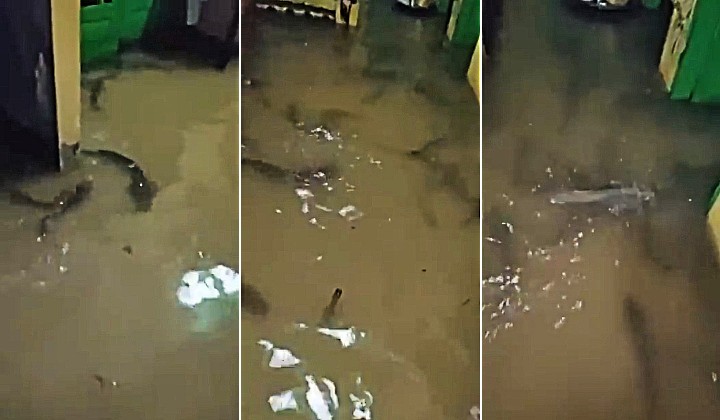 Some fishy footage that’s swimming around social media has Malaysians jumping out of the water with joy.

The 33-second clip shows the inside of a house that appeared to be teeming with schools of live freshwater catfish, after it was supposedly ravaged by floods.

In the video, the person behind the camera takes viewers on a personal tour inside the home which was filled with at least a few centimetres of muddy water and fish of varying sizes, in almost every room.

The video also includes some hilarious narration by a man with a distinct Terengganu accent who invites viewers to come and visit the makeshift aquarium.

Look at all the fish inside the house! Come, come, there’s all kinds of fish here. There’s fish everywhere. A lot of people are coming to visit my house. I’m only charging them RM5 each. Your kampung doesn’t have (this), right?

The video serves as a neat satirical commentary to the ongoing flood problems we experience in Malaysia every single year.

According to the Federal government’s “Infobanjir” flood information system, throughout 2020, floods have been reported across Terengganu, Kelantan, Melaka, Penang, Pahang, Perlis, Perak, Kedah, Negeri Sembilan, Johor, Selangor as well as the East Malaysian states of Sabah and Sarawak.

Thousands of people across the country have been forced to evacuate their homes and placed into temporary relief centres in order to wait out the floods.

In 2019, over 15,000 people across the country were forced to leave their homes and evacuate affected flood areas.

This year, the flood situation and ongoing evacuations have raised fears of further Covid-19 outbreaks.

Acknowledging this concern, Senior Minister (Security) Datuk Seri Ismail Sabri Yaakob was quoted as saying that the government was fully prepared to face the problem and “prays” that nothing bad will happen.