Snakes are known to seek out dry, warm places during the rainy season and floods. 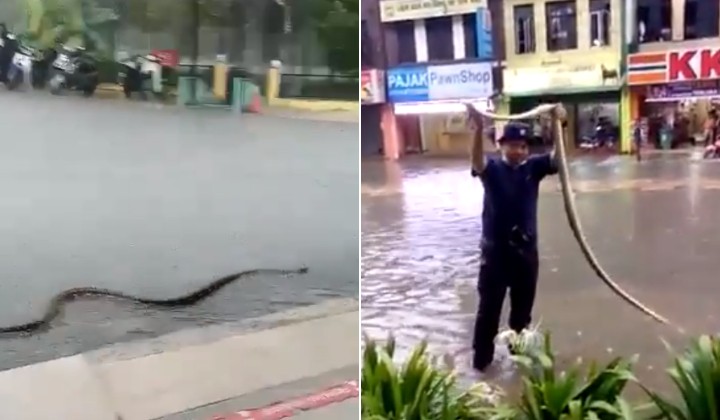 The massive flash floods that sunk parts of Kuala Lumpur on September 10 had also stirred some of the city’s more obscure residents out of hiding.

In one video, a huge python was seen seeking shelter from the downpour under a roofed parking area inside a mosque compound.

The 57-second footage caught the large reptile snaking its way across the pavement, following the flow of water during the heavy rain, before coming to a stop under its newfound shelter.

The clip cuts off just as the cameraman sneaks in for a closer look at the serpent.

The video also showed several onlookers on the scene standing watch, almost in disbelief at the animal that laid in front of them.

Meanwhile, another wildlife footage was captured near Kompleks Wilayah, KL. The same scene where a Perodua Kelisa was seen braving its way across the flooded road.

At over a minute long, the video shows a man in a dark blue hat fishing a snake out of the muddy waters.

Grabbing the serpent by its head and tail, the man parades the animal to pedestrians who are awed by what they’re seeing.

“Ular pun ada ooo?” said a person behind the camera.

After posing for photographs with his captured quarry, the man sets the animal safely onto a potted bush so it could get out of the rain.

Heavy afternoon rains had caused flash floods in several major parts of the nation’s capital, with some areas submerged under at least 3 meters of water.

According to wildlife experts at the Malaysian Civil Defence Force (APM), it’s normal to see snakes coming out of hiding during the rainy season or floods as they roam to seek out new shelter and hunting grounds.

In 2018, a six-meter, 80-kilogram python was captured near a home in Batu Pahat, Johor after a flood.

Snakes would curl up in warm and dry areas, making nook and crannies in our homes and businesses ideal places for them to hide.

APM advises people, especially children, to keep away from flooded areas, as snakes, particularly pythons, can be aggressive and move incredibly quickly while treading water.