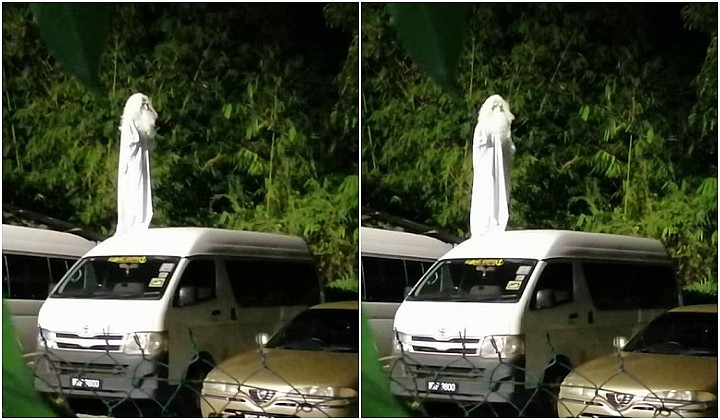 The authorities have gone to great lengths to make sure that everyone stays at home during the Movement Control Order (MCO) with business restrictions, roadblocks and even arrests.

However, there are some irresponsible individuals who still manage to slip through the cracks, turning a deaf ear to the warnings of the authorities and healthcare experts.

This is when you need to get a little creative, like this man in Terengganu who decided to dress up as a ghost and stood atop a van to scare his neighbours into staying inside.

Muhd Urabil Alias from Kemaman, Terengganu uploaded the spooky pictures of himself onto Facebook, which quickly went viral.

The 38-year-old man told Harian Metro that he decided to pull the ingenious prank because he noticed that there were still a lot of people, especially teenagers, who went out at night and did not comply with the rules of the MCO.

I just wanted to tease the stubborn teenagers in my neighbourhood so that they won’t go out at night.

So he dressed up in a white robe, put on a white wig and beard and proceeded to stand atop a white van for maximum spook factor.

And it worked! When he uploaded the pictures taken by his wife onto social media, people thought it was truly a supernatural being and they were deathly afraid to leave their homes.

Even netizens who spotted the viral images reached out to ask if it was real, though Muhd Urabil insists that even the caption clearly hinted that it was a joke. Nonetheless, he apologies if he and his wife went overboard with this prank.

Moral of the story? Just stay at home!