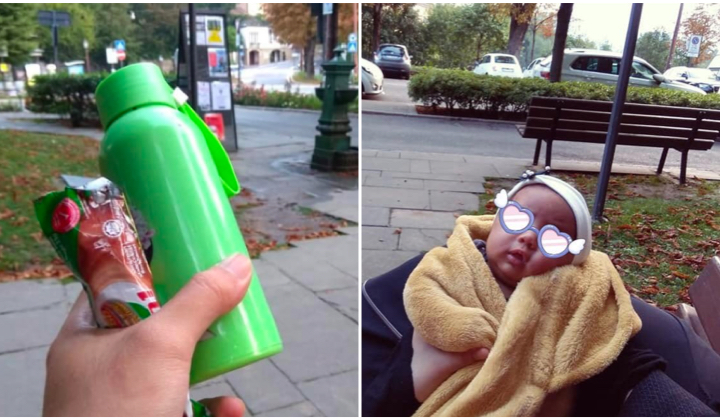 When going on a family holiday, everyone expects it to be a special fun-filled time where the family gets to enjoy the culture and scenery at the respective country being visited.

Even though family holidays can be expensive, most plan and prepare their activities, location, and duration of visit based on their available budget.

So, when Malaysian man, Zakuan Faiz shared his recent experience holidaying in Italy with his wife and baby where they slept on park benches to save some cash, netizens had mixed feelings.

I’m On A Budget GIF from Realhousewives GIFs

SLEPT ON PARK BENCHES TO SAVE ON ACCOMMODATION.

According to a now deleted Facebook post, Zakuan, together with his wife and baby slept on park benches in Citta Alta, Bergamo, Milan, Italy, just to save on hotel accommodation.

In his post, he explains that the parks were quiet and deserted with not even a policeman in sight.

Furthermore, next to their bench was a drinking fountain which they used when thirsty while they snacked on biscuits.

Zakuan goes on to explain how they purposefully chose to not have any accommodation to save about 50 Euro per night and stated that during their four day stay, they only slept in a hotel for one night.

Zakuan admits that part of the reason why they decided to spend one of their nights in a hotel was to shower, wash their clothes and restock on tiny Nutella and sugar packets from the complimentary breakfast buffet.

BABY WASNâ€™T CRANKY AND WIFE IS STRONG AS STEEL

In the Facebook post, Zakuan further shares that he is thankful his baby wasnâ€™t cranky and his wife is strong enough to keep up with him while they travelled.

He brings up that the only time his wife got upset throughout the duration of their holiday was when she cried after they got stuck at the airport for 10 hours and her lower back began to hurt from carrying the bags and their baby.

Saying that the responses to his post were unpleasant would be an understatement.

Social media users were appalled at the fact that he would put his wife and child through such circumstances.

the mother only ate biscuit and if the baby is breastfeeding, the mother mesti lack of energy. Pity the mother and the baby.

â€œFoolish.. just because he wants to travel.. endangering his familyâ€

â€œWhat was he thinking while doing all this. When I go for a holiday I would make sure I have enough money for accommodation, food and emergencies. They werenâ€™t on holiday, they were just torturing themselves.â€

â€œI thought only white people do dumb things like these. Turns out my own people are like this too. How embarrassing.â€

â€œThere are many mosques in Citta Alta, yet they sleep in the parkâ€

Since then, Zakuan has come forward to clarify the circumstances of his trip.

He explained that their flight landed in Poland in the wee hours of the morning and his wife and him had decided that checking into a hotel before noon wouldâ€™ve been a waste of money and that was why they slept on a park bench.

With regards to their child, their baby was well cared for as Zakuan and his wife had made sure their baby was comfortable and itâ€™s needs were met throughout their trip.

According to Zakuan, he has travelled to almost 50 countries and hence has had some experience travelling. This was also not the first time they took their baby on holiday and the child has in fact visited almost 22 countries.

He also stressed that they were not penniless during their trip as he had enough cash and a credit card for emergencies. He clarified that his family has travelled quite a bit as mentioned above and chose a slightly more extreme experience this time on purpose.

He finished his post saying that while itâ€™s true that they stayed at a hotel for only one night during their four day stay, the other nights were spent at an Airbnb and not on park benches.

You can read Zakuanâ€™s response full posts below: