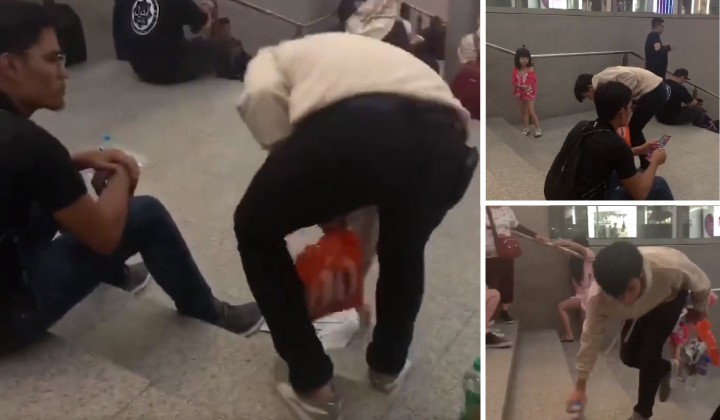 It’s no big secret that most Malaysians arenâ€™t too keen when it comes to public cleanliness.

Sure weâ€™d have a couple of the classic gotong royong sessions to spruce up the neighbourhood every now and then. But for the most part, weâ€™ve all been guilty of either turning a blind eye on the mess we see around us or the cause of the problem ourselves.

Having enough of this il-litter-acy rate, a couple of homegrown gents took it upon themselves to clean up after an unconcerned society.

location @ pavilion, where are the manners yall pic.twitter.com/jwPJzdYAqh

Through a video posted on Twitter, user durk attempts to educate the public on proper public etiquette.

The 1-minute clip shows the cavalier cleaners picking up garbage littering the steps of the Pavilion mall in KL, while several onlookers oddly gawked by.

After gaining their bounty of junk which consisted of scraps of paper and empty drinking containers, he effortlessly threw it all away in a garbage bin.

The video cuts away with the citizen watchdog reminding everyone to take better care for the planet.

It wouldn’t hurt to slowly start picking up the garbage we see laying around us right?

With the threat of the global climate crisis looming on, people from all over the world have already begun to realize the importance of keeping the Earth clean.

An online phenomenon called the “Trashtag Challenge” had even taken root to promote and educate the globe on the ongoing litter problem.

#trashtag has the simple premise of calling upon the public to clean up after any mess that they’d encounter and post “before and after” pictures of their work.

The Trash was segregated on the beach to recover plastics and other recycleables. #Bethechange #SDGs 🅿️🥊 pic.twitter.com/RPuXNZpyfD

Would you take on the Trashtag Challange?