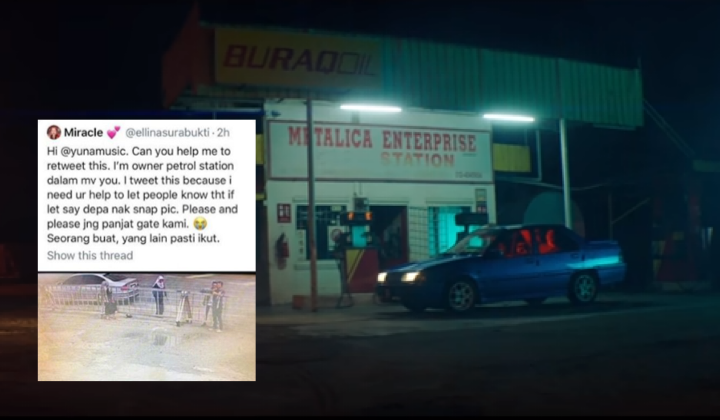 Yunaâ€™s Forevermore music video was downright stunning. Shot entirely in Malaysia, the music video was an ode to Malaysian upbringing and had all Malaysians watching it feel a sense of pride and nostalgia for our childhood days.

The opening scene to the music video sees Yuna sitting in a first generation blue Proton Saga parked at an old petrol station in Kangar, Perlis. The visual was so beautiful that many could not believe such a place existed in Malaysia.

The scene left such a strong impact on Malaysians that since the release of the music video, throngs of people have been visiting the old petrol station to take photos of themselves there.

21k Perlis Marathon, wish to perform well but look like today is not my day, Pace is good to 10k Then is old down hill from there, Thanks to all you prayed and wish, may or may not Joined need year as environment is very intense, Congrats to all runners and crew of #perlismarathon2019 #adidasrunning #adizero #adizerosub2 #garmin #stravarun #strava #batwingsrunningclub #yunaforevermore #bleesed

Which is really all fine and dandy when itâ€™s open. However, problems arose when some members of the public climbed over the petrol stationâ€™s gate and trespassed onto the premises while it was closed to get their picture-perfect shot.

It appears that the trespassing got pretty bad till the owner of the petrol station was forced to turn to Yuna for help. The owner, @ellinasurabukti tweeted an appeal to Yuna, asking if she could help let her fans know to not climb over their gate when trying to capture their Insta-worthy shots.

Soon after receiving the tweet, the Malaysian songbird quoted the tweet to her followers reminding them to be respectful of business owners and their property.

Hey everyone visiting Forevermore locations in Perlis-including this petrol station, please respect the business owners and dont climb over their gate🙏🏽 be nice pls, dont trespass..lets all be respectful. Peace & love!! https://t.co/kLCQpMrvGd

It isnâ€™t known yet if Yunaâ€™s tweet has been much help to @ellinasurabukti, though she has since deleted her initial appeal and thanked Yuna for her help.

While we totally get the appeal of getting your own pics taken at the locations featured in the Forevermore music video (that music video is REALLY beautiful), maybe committing a crime like trespassing or breaking and entering is taking it too far?

If you haven’t watched Yuna’s music video yet and don’t get the hype, check it out below!