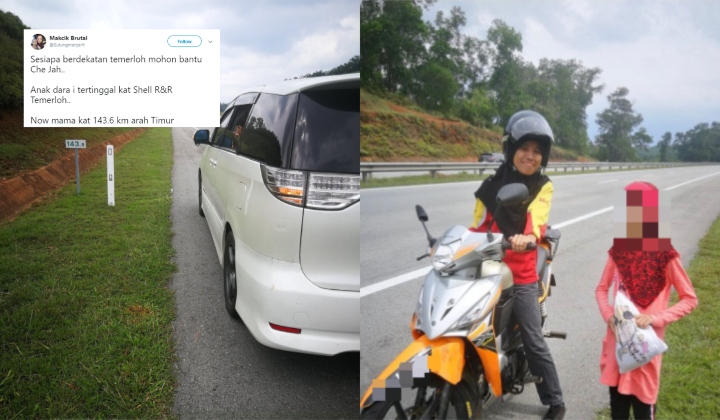 When you come from a family with many siblings, it’s hard to keep track of everyone all the time and every once in a while one sibling is bound to be forgotten.

This is exactly what happened to Twitter user @Sutungmenjerit .

The mother of six panicked after discovering that she had accidentally forgotten her 12-year-old daughter and left her behind during their balik kampung journey along the East Coast Expressway, yesterday.

At around 2pm, @Sutungmenjerit, or better known as Che Jah tweeted about the incident, asking Twitterjaya to help her get her daughter back.

According to her string of tweets, Che Jah was driving on the East Coast highway with her six children and along the way, they made a stop at the Shell station at R&R Temerloh.

During the stop, some members of the family got down to perform the afternoon prayer, others got out to stretch their legs and several stayed inside their car to nap.

After the pitstop, Che Jah continued her journey and had driven for approximately 15km before receiving a phone call from one of the employees at Shell who informed her that she had accidentally left her daughter behind!

Initially, Che Jah wanted to turn her car around and head back to the R&R for her daughter.

She called the highway patrol for assistance and they advised her to just wait by the side of the road. Unfortunately, due to a large number of vehicle breakdowns along the highway, the patrol could not attend to Che Jah immediately.

After waiting for quite some time for the highway patrol to help bring her child over, one of the employees at Shell offered to send the daughter over via motorbike instead.

Malaysian netizens were both humoured and appalled by the idea that a mother could have possibly forgotten one of her children. Many related their own similar stories of being left behind as children.

Meanwhile, some netizens shared several tips with Che Jah to help her avoid a similar mishap from occurring again. Popular suggestions were taking a roll call, doing a head count and lining the kids up before letting them get into the car.

Either way, we’re glad Che Jah’s daughter was safely reunited with her family!

And we can confirm that it’s definitely tough to keep track of all the siblings when you have so many. This writer also got left behind and forgotten before.