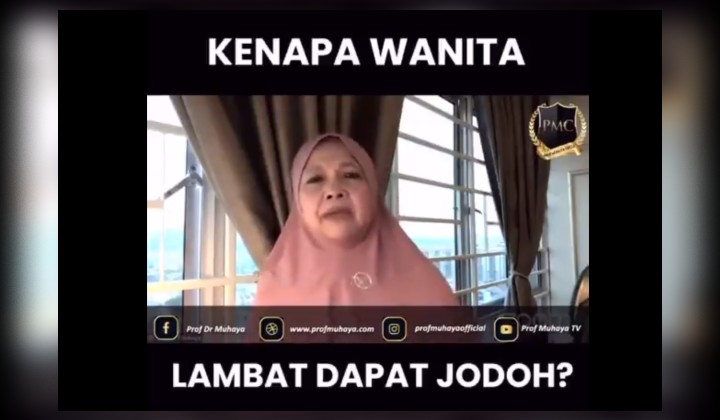 A local motivational guru is under fire for sharing what many described to be sexist views on how women should behave in the pursuit to find a husband.

A snippet from a video released by Prof Datuk Dr Muhaya Mohamad was recently reposted on Twitter – in which she had gone on about how women, particularly those who were married, should “celebrate” the leadership of men.

“We women appreciate men, their strength, they are leaders,” said the professor in the clip, explaining how women should respect men before suggesting that they shouldn’t worry themselves in trying to find equal footing among those of the opposing gender.

Don’t be so excited to be a liberal, want to stand together with men. No. Later when you are too eager to do what men do, your testosterone (levels) would increase and for those who are not married yet, it’s going to be a while before you’ll find a partner. Those who have high testosterone, continue to (have) drive, want to achieve, want to be independent, then it’s like that.

The profesor later went on to unsolicitedly describe what men’s taste in women are.

Men like gentle people with high estrogen (levels), wishful, in need of help. It’s okay to be a bit dumb, it’s alright. So for those who haven’t found a partner, take a look at your character.

Naturally, netizens weren’t too quick to agree with Dr Muhaya’s perspectives about how women should or should not conduct themselves.

Better to be single and financially independent than to give up your legal rights by marrying a man who expects women to be docile and submissive little things. https://t.co/IRxunZxnqb

Just her age alone shows that this is a mentality that has been ingrained into her since young. But now, *we* know better. Dumbing ourselves down only opens the door to manipulation, abuse, and subjugation. We will no longer allow it to happen to ourselves and our daughters. https://t.co/8b7CYnNeSd

Some even went on to say that the professor lacks the credentials to be in the motivational business.

Prof Muhaya is an eye specialist. Not a psychologist / Islamic scholar / marriage counselor / a professor of sociology or human behaviour.

With more than two decades worth of experience in all things motivational, 62-year-old Che Muhaya Mohamad from Terengganu is the face behind the ‘PMC Plus 6’ academy – an institute that literally says that “it will help you to learn in a new ways” on its About page.

The academy seems to provide learning and motivational classes on “Healing” and “Magical Marriage Course”, among other things.

According to an article by Berita Harian, Dr Muhaya is credited to be an eye surgeon as well as the first female doctor in Malaysia to have studied Uveitis (a form of inflammation in the eye).

Her most notable achievements include being awarded as a Tokoh Ilmuwan Selangor in 2010, the Anugerah Dakwah Wanita Negara or the National Women’s Preacher Award in 2015 and even the Malaysian Service Medal (PJN) in 2016.