Susuk is a practice prevalent in the Southeast Asia region. 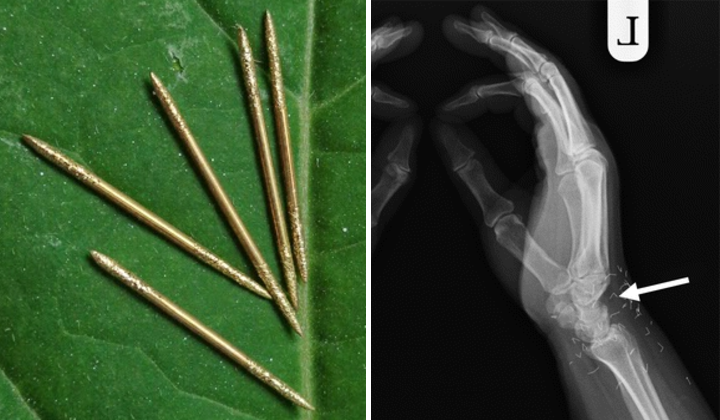 Firstly: I am not a superstitious person, but I am not fool enough to dismiss mysticism or the supernatural. Some things just cannot be explained.

Yet I recently learned of the black magic of ‘susuk’– charm needles used by shamans in the Malay and Indonesian culture, and embedded into soft tissue. These charm needles are invisible to the naked eye and are often claimed to be made of precious metals such as gold.

They can only be handled by experienced shamans, for both insertion and removal. Additionally, patients are not allowed to speak of the charms they have in their bodies or else the magic will be lost.

The charms are often inserted around the facial area to maintain health and beauty, or around other body parts for pain relief or health. Patients will not be able to feel it or see it, but simply believe that it works.

Are charm needles even real?

Now, if you tell me that someone is inserting invisible needles into bodies that can’t be seen or felt or even spoken about, it sounds like a lot like a scam ala The Emporer’s New Clothes.

However, they seem to be relentlessly real– because they show up in x-ray scans, constantly.

In fact, the topic of susuk has shown up in medical journals multiple times because it becomes a problem for doctors. Since they cannot remove the needles (once again– it’s invisible, and likely moves around a lot in soft tissue), further medical intervention may be risky in those areas.

Susuk is well-recognized in dental radiology

The most common place to find susuk needles is in the facial and jaw area, which is why it’s most commonly known in dental radiology.

Even upon questioning, patients may not disclose the susuk needles, not only because doing so removes the effectiveness of the charm, but also because the patient may not be aware of its existence in their body.

The insertion of these needles can be done in young children, so they may grow up without knowing of it until an x-ray is done.

These medical journals often conclude that because the susuk needles are small and made of metal (gold) that is biocompatible, it is unlikely to cause adverse harm or lead to complications.

Still, it would require the diagnosing practitioner to recognize susuk needles in the first place, as they can be misdiagnosed at foreign bodies from trauma, broken acupuncture needles, shrapnel, or even root fillings.

However, foreign bodies can always pose a potential risk, either as damage to vital organs or penetration of neurovascular structures.

While there’s physical evidence that susuk needles exist and stay in patient’s bodies, whether or not they truly are ‘charmed’ and provides any benefits to the wearer still remains to be seen.

Or, I suppose, you can make sure the bomoh you’re seeing has five-star reviews from their customers.