Netizens argued why a teenager was fined RM1,000. 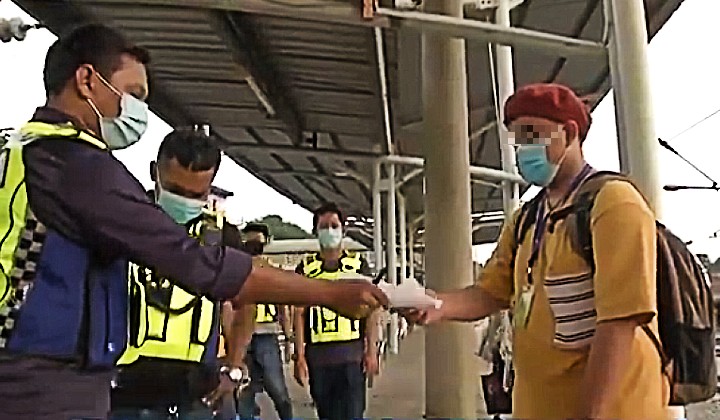 Malaysians are calling out double standards on authorities’ enforcement of the nationwide mandatory face mask rule in public spaces.

The segment describes how a teenager, believed to be a student, was among the five people that received RM1,000 saman for not following the rules during inspections at the station.

News of charges against the youth has Malaysians outraged at the government’s execution of the mandatory mask rule.

Social media users came to question the authorities’ decision to issue a fine to the boy instead of letting him off with a warning.

Sometimes kan you lot forgot to be human.

Its not like he isnt wearing a mask at all.

Go talk to him, remind him lah, give him a warning

At this current situation, 1000 is a lot, especially for students. You have no idea how this will effect him financially this month. https://t.co/Xng6VCAlar

Other commenters also criticize how authorities were apparently not providing the same level of treatment to supposed members of the country’s elite.

Besides sharing images of some of the country’s public figures which they claimed had violated Covid-19 guidelines, netizens also argued that there were supposedly two sets of rules governing the nation that’s determined by one’s “social class”.

Starting August, Malaysians risk being slapped with a RM1,000 fine for not wearing face masks in crowded public areas, under the Prevention and Control of Infectious Diseases Act 1988.

Following some public confusion regarding the particulars of the mandatory mask rule, the government has provided a list of places where the wearing of masks is compulsory which you can check out, HERE.