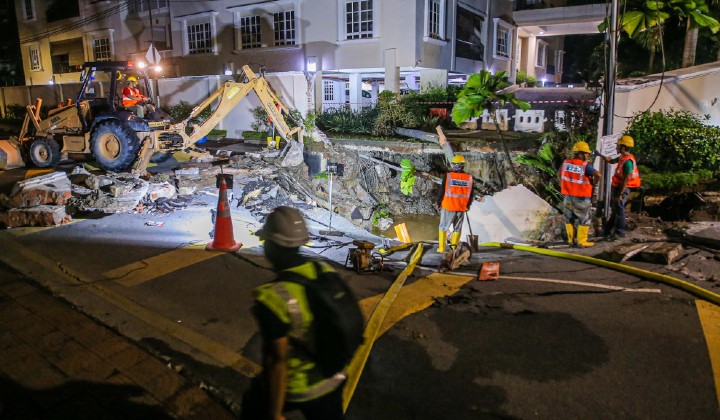 A giant sinkhole swallowed up a road as well as the compound wall of a luxury condominium near the US Embassy at Taman U-Thant, Ampang Hilir, Kuala Lumpur over the weekend.

The sinkhole, which looks to be filled with water, had even almost devoured a nearby tree and telephone pole.

On social media, netizens also apparently shared images of the sinkhole forming, before it collapse entirely.

The Kuala Lumpur City Hall (DBKL) suspected the cause of the incident to be a burst water pipe somewhere in the area and are working to fix the problem.

Previously in 2019, three different sinkholes had popped up in our nation’s capital, including a large one that caved in the middle of Jalan Maharajalela, KL. Plunging a lone MyVi into its depths.

Though the thought of the ground disappearing beneath your feet might be the stuff of nightmares, sinkholes are a real phenomenon that happens everywhere around the world.

Sinkholes are, well, holes… that appear on the ground.

They can either be small and shallow or large and deep enough to devour people, vehicles, or entire buildings.

Like many other things on this planet, sinkholes can occur naturally or from man-made causes, where human development can compromise the structural integrity of the ground’s surface.

There are 3 types of sinkholes that basically form the same way due to erosion and water drainage;

1. Cover-collapse sinkholes are the ones that can occur abruptly. It happens when cracks underneath the surface are eroded and hollowed out by water creating a cavern underneath a layer of soil on the surface. This cave that forms underground then collapses under its own weight, exposing the cavity that had formed over time.

Though the sinkhole itself can appear suddenly, the erosion process usually happens gradually and out of sight.

2. Cover-subsidence sinkholes happen way slower. It’s caused when bedrock underneath the surface is worn down or dissolved by water.

This creates a cavity that gradually pulls sediment into the empty spaces underground, making a depression on the surface.

3. Dissolution sinkholes form when water runoff flows into cracks in the ground and eats away at the bedrock bit by bit, creating a depression on the surface.

These crevises can get plugged up by debris, trapping water and forming ponds and wetlands on the surface.

Concerningly, the adverse impact of the Climate Crisis is also causing more sinkholes to appear.

Changing temperatures and unpredictable weather is changing the very geology of our planet affecting not only human-populated areas but also everywhere else around the world.

There is still a lot that we do not know about our planet, and it’s scary to think that the actions we take are changing the very face of this hunk of rock floating in space we call home.

Source: Sinkhole appears at Taman U Thant road, DBKL says remedial works underway Third sinkhole appears in KL Car Fell Into a Sinkhole? We Tell You Who Pays For It What are sinkholes, how do they form and why are we seeing so many? Study: Your Kids & Grandkids Don’t Stand A Chance Against The Climate Crisis
Tags
erosion featured sinkhole water