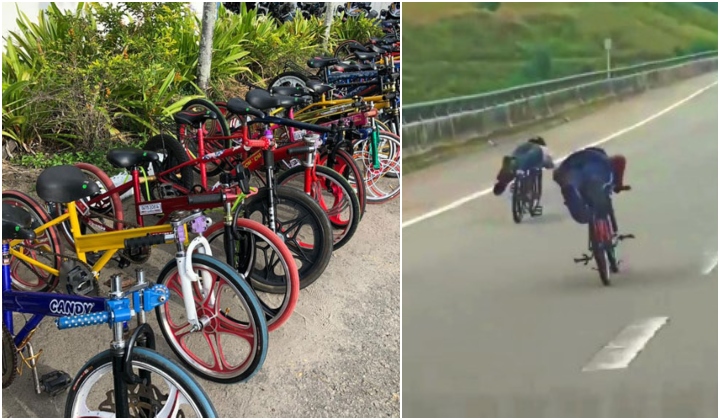 Kids these days aren’t doing any of these anymore though. Instead, they’re vaping and modifying their bicycles into basikal lajaks.

And these social problems might be worse than ours considering how fatal the basikal lajak trend can be.

In the last few months, the trend has become more popular with motorists regularly seeing kids dangerously riding these modified bicycles on public roads and highways.

Recently, Pertubuhan Kebajikan dan Dakwah Islamiah Malaysia (Pekida) Kelantan suggested that since we can’t stop kids from taking part in racing their basikal lajaks, the government should instead build a facility that allows them to practice their hobby in a safe environment.

“Before this, there were a lot of problems caused by these young riders on public roads.
Yes, they should not do it on public roads. But, what other suitable areas can they do this activity?
So the government should think of a way to handle the issue, and take the initiative to prepare a proper place for them.”

Mudzahar Makhtar via Sinar Harian (translated from BM to English)

Although most social media users disagreed with Mudzahar. He has the right idea: Kids need a safe place to spend time doing things they’ll enjoy.

On Twitter, user @FrenchSuriRumah put forth an interesting argument.

She suggested five deeply rooted problems that she believes are leading to kids taking part in this dangerous activity:

4. Absence of public playground that is made for teenagers
5. Lack of public libraries that is filled with comic books!

According to her, the basikal lajak problem is actually just a symptom of a much larger social problem and the real victims here are these kids.

In a 2014 survey conducted by the Women, Family and Community Development Ministry, juvenile offenders in correctional centres worldwide admitted that curiosity and boredom were among the main reasons why they got into trouble with the law.

Boredom is actually a normal response for growing children and IT CAN motivate them to find something meaningful to do.

However, problems occur when children have no positive role models or parental supervision to guide them into directing their energy into something useful and healthy.

The 2014 survey also found that half of the juvenile respondents came from families earning less than RM1,000 a month.

These parents were working several jobs or overtime to make ends meet and this led to them becoming unable to spend time or pay attention to their children.

As @FrenchSuriRumah’s tweet suggests, there is a systemic failure in keeping pre-teens and teens, especially those in poor communities, occupied with healthy activities.