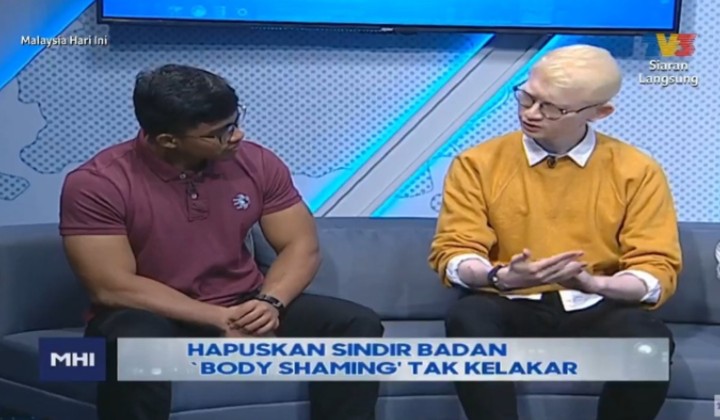 Yesterday, Twitterjaya blew up with a clip of Twitter personality (or as Malay Twitter calls him, Twitpemes) @Azfarovski, who happens to have albinism, calling out his fellow panellist on live TV for cyberbullying him.

Ironically, one of the victims of body shaming himself, @Shazwan, had his own history of cyberbullying others.Â Â

A few months back, Shazwan quoted a news headline about an albino teen being slaughtered for a black magic ritual by saying â€œSomeone should hunt and cut up Azfar tooâ€.

Upon public uproar, he deleted the tweet but it was too late; the screenshots had already been circulated online.

Instead of hiding behind the safety of a screen, Azfar took to live TV to call him out face-to-face saying:

â€œFirst of all, I will give you my first hand experience of how you wonâ€™t get away with body shaming, or cyberbullying. So, on August 20th, Astro Awani published an article about a Tanzanian child being slaughtered in the name of a ritual.

Thatâ€™s whatâ€™s been happening to albinos in the world. Shazwan, you quoted the article and tagged me, saying something along the lines of â€œAfter this we can hunt down and cut Azfar tooâ€.

It rendered Shazwan speechless, and he could barely respond.

This incident was met with mixed reactions from Twitterjaya; some were supportive:

He maturedly handled the topic with an example to drive the point home.

It’s a lesson for all jaguh kampung. https://t.co/INJH3fCOBB

Others felt it was uncalled for and could start a vicious cycle of cyberbullying.

Actually kan when he called out that guy on national tv, he opens doors for people to cyber bully that guy (which u can clearly see now ramai yg attack the other guy)

So macam…. hmmmmm you are not the better person here. And also you didnâ€™t put an end to anything pun……

One Twitter user also joked about how the producer would get an earful for not preventing the panellists from mentioning their competitor (Astro Awani) on screen.

Let me tell you whatâ€™s most shocking about this, kids. @Azfarovski went on TV3 and quoted ASTRO AWANI. Media Prima and Astro people understand what Iâ€™m talking about https://t.co/Hr4uYjiPS7

Or you can also get called out on live TV and risk ruining your own reputation.

Responding to naysayers who called him out for his derogatory remarks in the past, Azfar tweeted:

When I decided to talk about it on TV, I knew people would dig up my old tweets. Be it racist, sexist, bigoted, body shaming etc.

But itâ€™s alright. Even if my image goes down the drain, I would like to make a stance and say that itâ€™s not, and never will be, alright.

Be the judge and watch the full clip here.