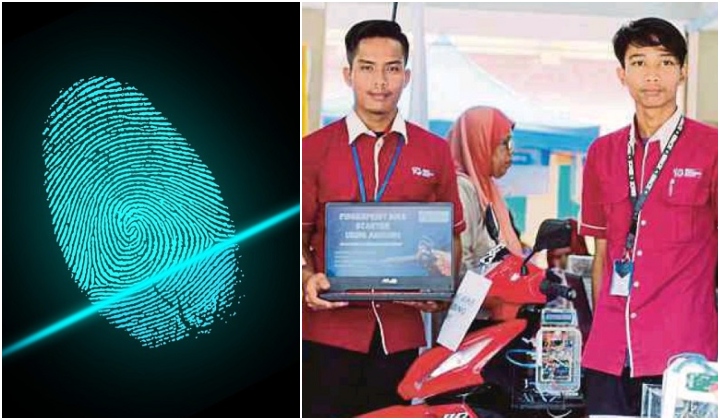 Motorbikes are practically target No1 for thieves.

According to government statistics, roughly 86 motorbikes are reported stolen every day.

Sick of this rampant crime, two Kelantanese teenagers have
come up with a brilliant solution:

A fingerprint scanner that starts motorbikes!

The Diploma in Electronic Technology students told Harian Metro that they wanted to do something to prevent motorbike thefts as the electric starters can be accessed by anyone.

By upgrading the system to include a fingerprint scan, it effectively removes access for unscrupulous individuals.

Besides the ownerâ€™s fingerprints, the Fingerprint Bike
Starter system can store and recognise up to 127 different sets of
fingerprints!

To start the motorbike, all you need to do is just put your finger onto the scanner and itâ€™s vroom vroom time!

This ingenious solution to motorbike thefts is simply inserted into a vehicleâ€™s engine. No charging or battery required!

Their biometric authentication device is built using open-source Arduino software and has a voice-recording system, liquid crystal display (LCD) and fingerprint scanner brought in from overseas.

According to Bernama, the whiz kids spent around RM500 and 6 months developing the system, including building a prototype and testing on an actual motorbike.

FYI, the Fingerprint Bike Starter system can also be used on CARS.

Wan Amiruddin and Adeeb Aideen have already received orders for their handy system from lecturers and fellow students. As it’s just the two of them, installation takes 12 days.

Thatâ€™s some incredible work by the two teenagers!

TRP would like to wish them all the success as they take their invention to greater heights.

Check out stories on other resourceful young Malaysians like the student who made an eco-friendly brick from recycled plastic (HERE) or this other genius who built an RFID keycard lock on his hostel door (HERE).