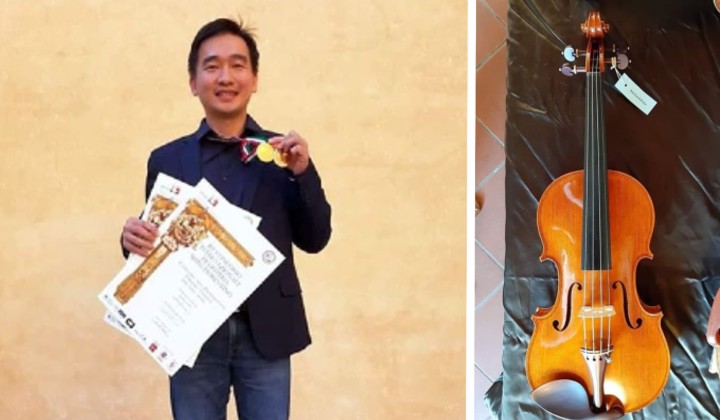 Tan Chin Seng smashed the 10th International Violin-Making Competition held in Italy with not just one, but TWO gold medals.

A luthier is someone who builds or repairs string instruments generally consisting of a neck and a sound box.

The proud Malaysian won gold for both his violin, named “Negaraku“, and his viola, named “Jalur Gemilang“.

Tan, 39, was shortlisted to compete with fellow luthiers from over 16 countries, including Italy, France, Switzerland, Germany, Japan, South Korea, and China.

The competition hosted professional and non-professional instrument-makers from all over the world, judged by master luthiers.

Each instrument is judged on craftsmanship and tested for acoustic performance.

All the award-winning instruments will be on exhibit at the School of Violin Making of Tuscany from September 8 to 15.

Tan is the first ever Malaysian to win gold at the competition. Yet he is humble of this historic achievement, saying that “unlike badminton, this is a rather minority interest”.

Tan is the pupil of renowned luthier Han Zhao Sheng of Beijing and Bertrand Yves Delisle of Cremona.

From Borneo To London, How A Sabahan Won 2nd Place In Fashion Design Competition

Feel bad about your belly? There’s a big belly beauty pageant in Sabah